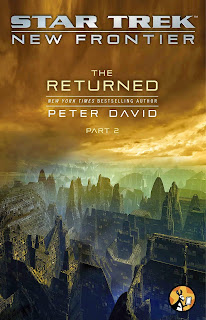 Part 1 of The Returned left us with a cliffhanger: Calhoun and his crew had traveled to a pocket universe in hot pursuit of the aliens responsible for the genocide of the Xenexians in order to rescue the Starfleet personnel they had taken hostage.

In this episode of Literary Treks, hosts Matthew Rushing and Dan Gunther discuss The Returned, Part 2. We talk about the soap opera nature of New Frontier, how the story works for a long-time reader, a captain on the edge, a lively universe, a surprising guest, being in middle book purgatory, permanent political classes, the fight for survival, and the good that men don't do.

In the news segment, we discuss the latest issue of Star Trek Ongoing #48.