Captain Kirk and the crew of the Enterprise are assigned to escort Ambassador Sarek to the planet Akiron, a world rich in dilithium deposits. However, upon arrival, they discover the people of Akiron under attack by strange creatures, described by their victims as “demons.” It is now up to Kirk, guided by a mysterious Kathikar mystic, to save the people of Akiron from these sinister “wights.” Meanwhile, Sarek’s Vulcan aide, L’Nel, has a diabolical plan in place for Spock--a plan that will result in his death!

In this episode of the Positively Trek Book Club, Bruce Gibson and Dan Gunther are joined by author David Mack to discuss his Kelvin Timeline novel, More Beautiful than Death. We talk about the long road this book took to publication, how David wrote the characters of the Kelvin Timeline, Sarek’s role in the story, how Kirk’s beliefs inform his character, and the Spock/L’Nel subplot. We also talk about David Mack’s role as a consultant on Lower Decks and Prodigy, and wrap up with what he is working on now and where he can be found online.

Posted by Dan Gunther at 9:30 AM No comments:

Where would we be without our regular fix of Star Trek fiction? Today sees the release of a new novel, ten years in the making: More Beautiful Than Death by New York Times' bestselling author David Mack!

Set in the "Kelvin Timeline" of the last three feature films, this novel features the alternate crew of the U.S.S. Enterprise under the command of James T. Kirk. Their mission: to escort Spock's father, Sarek, on a diplomatic mission to a planet seemingly under siege by horrific demons! 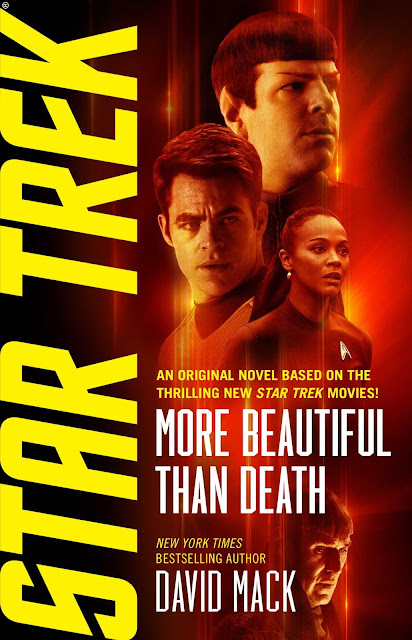 
An original novel based on the thrilling new Star Trek movies!

Based on the “Kelvin Universe” movie saga!

Captain James T. Kirk and the Enterprise crew escort Spock’s father, Ambassador Sarek of Vulcan, to a dilithium-rich planet called Akiron. They arrive to find this world under siege by creatures that some of the planet’s denizens believe are demons. Sarek orders Kirk to abandon the mission, but the young captain won’t turn his back on people in danger. After a harrowing encounter with the dark-energy “demons,” Kirk’s belief in a rational universe is challenged by a mystic who insists that it wasn’t coincidence that brought Kirk to Akiron, but the alien equivalent of a Karmic debt.

Posted by Dan Gunther at 8:29 PM No comments:

In the history of the Federation, the story of first contact between Humans and Vulcans is well-known: Earth astronauts came to the rescue of a Vulcan ship, stranded in our system’s asteroid belt. The rest is, as they say, history. But what if the official story is not how it actually happened? What if first contact with the Vulcans actually came many years earlier? And what if Captain James T. Kirk and the crew of the Enterprise were instrumental in that event happening the way it did?

In this, the first episode of the Positively Trek Book Club, hosts Dan Gunther and Bruce Gibson are joined by author Margaret Wander Bonanno to talk about her renowned and much-celebrated novel, Strangers From the Sky. We discuss how Margaret became a fan and an author of Trek books, how this story came about, how it stands up in the face of the canon that has moved on in the years since it was published, the characters that populate the story, and how its legacy has affected Trek Lit in the years since.

Next episode: More Beautiful than Death by David Mack


The Enterprise and her crew finally make it back to Federation space, but the Federation they find isn’t quite the same as the one they had left behind. Meanwhile, Aegis and Gary Seven’s grand design continues to take shape—and the consequences will be staggering. The final voyages of the original Enterprise crew continue in this episode from showrunners Jackson Lanzing & Collin Kelly (GREEN ARROW, NIGHTWING)!

Click here to watch my video review of Star Trek: Year Five #13, or click play on the embedded video below!

The start of a new story arc, in which the Enterprise crew returns to Federation space to find their peaceful society showing cracks at the edges. A fascinating concept, and very much in line with the current trend of Star Trek storytelling in recent years. I'm very much looking forward to seeing where this story ultimately goes. Highly recommend!

In the aftermath of the devastating events of the Destiny trilogy, the Starship Titan is once again assigned to deep space exploration beyond the farthest borders of the Federation. Investigating an oceanic world of abundant and mysterious life, the crew unwittingly causes distress to the ecosystem and to the lives of the inhabitants of the world, nicknamed Droplet. Now, Captain Riker and Ensign Lavena, cut off from the rest of the crew, must convince their captors of their sincere desire to help the people of Droplet before the damage becomes irreparable.

In their final episode as hosts of Literary Treks, hosts Bruce Gibson and Dan Gunther discuss the Star Trek: Titan novel Over a Torrent Sea by Christopher L. Bennett. They talk about Titan's new mission, the Squales of Droplet, Ensign Aili Lavena and her past, a difficult maternal situation for Deanna Troi, the unintended consequences of the crew's decisions, atonement for past mistakes, and wrap up with their final thoughts and ratings.

At the top of the show, Bruce and Dan review the first issue in IDW's new Deep Space Nine miniseries, Too Long a Sacrifice.


Previous episode: Literary Treks 307: Twisted Like a Bag of Bread
Next episode: Stay Tuned for Book Coverage on Positively Trek!