Prey: Book 3: The Hall of Heroes
by John Jackson Miller

At long last, the Prey trilogy is complete! Today is the official release day for book three, The Hall of Heroes! Find out how this epic saga concludes by picking up your copy at your local bookstore (or downloading the e-book from your favorite vendor) today! 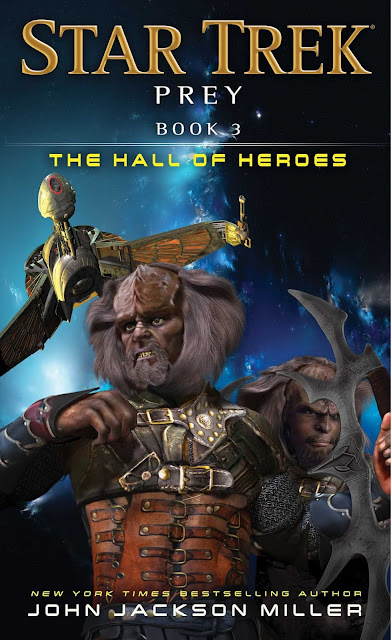 The Klingon Empire stands on the precipice. In the wake of violence from the cult known as the Unsung, paranoia threatens to break Chancellor Martok’s regime. Klingons increasingly call for a stronger hand to take control...one that Lord Korgh, master manipulator, is only too willing to offer.

But other forces are now in motion. Assisted by a wily agent, the Empire’s enemies secretly conspire to take full advantage of the situation. Aboard the USS Titan, Admiral William T. Riker realizes far more than the Federation’s alliance with the Klingons is in danger. With the Empire a wounded animal, it could either become an attacker—or a target.

Yet even as hostilities increase, Commander Worf returns to the USS Enterprise and Captain Jean-Luc Picard with a daring plan of his own. The preservation of both the Empire and the Federation alliance may hinge on an improbable savior leading a most unlikely force....

Previous Release: Prey, Book 2: The Jackal's Trick
Next Release: The Original Series: The Face of the Unknown

Spoilers ahead for Captain to Captain!

Part of the joy of reading Star Trek novels is the opportunity to learn more about characters who we only briefly got to know in an episode or two of the television series. Such was the case with the previous novel I reviewed, DS9: Force and Motion and its exploration of Benjamin Maxwell. That opportunity arises once again in this novel, Legacies, Book 1: Captain to Captain.

Una, known as "Number One," the enigmatic first officer of the Enterprise under Captain Pike, has long remained a mystery. Seen only in the original unaired pilot, "The Cage" (and then again in reused footage for the Original Series' only two-parter, "The Menagerie"), Number One struck me as a fascinating character about whom I would love to know more. Over the years, there have been a number of stories that go deeper into her character, most notably for me the Star Trek: Crew comic series by John Byrne. However, Captain to Captain explores her character more deeply than any other Star Trek novel has before.


This does serve to give the story a bit of a disjointed feel, with Kirk, Spock, and company only featuring at the beginning and end of the novel, with the middle given over to flashbacks showing a mission that Una led years earlier. During the course of this mission, then-Lieutenant Una lost a number of crewmembers, who were transported to an alien universe by a hostile species, the Jatohr.

The drama centers around the "transfer key," a Jatohr device that can instantaneously transport someone from our universe to the alien realm. The key has been secreted away in the captain's quarters of the Enterprise since the days of Robert April, the first captain of the Enterprise. The key has remained the secret of each captain and first officer until now, when Captain Una steals the key in an attempt to rescue the crewmembers she left behind years earlier.

Captain to Captain is certainly an interesting start to the Legacies trilogy, but it wasn't exactly what I was expecting. The focus of so much of the story on Robert April's days on the Enterprise and the spotlight on the character of Una surprised me, and it took some time to get used to.


As far as setups go, Captain to Captain does its job, laying the groundwork for the adventure yet to come. The central conceit of an artifact handed down from "captain to captain" doesn't really work for me; the logic of the situation tends to tall apart upon close examination. However, it is an adequate MacGuffin to get the plot in motion.

There are certainly some exciting parts in this novel: the Enterprise's chase of Captain Una as she makes off with the Transfer Key was a lot of fun, and did a lot to establish just how impressive this character is. Additionally, the cliffhanger ending does a great deal to make me excited for the next chapter in this series. As far as plot twists go, the final chapter is something I certainly did not see coming.

A little unfocused, Captain to Captain nonetheless does a competent job of setting up the Legacies trilogy. While the bulk of the story is not quite as attention-grabbing as the first book in a trilogy should be, this novel does redeem itself with a cliffhanger ending that has me hooked. Limited "screen time" for Kirk and company makes this a bit of an odd one for a 50th anniversary celebration of The Original Series, but I'm sure they will get ample attention in the follow-ups.

More about Captain to Captain:

Next up, a review of the Deep Space Nine e-book exclusive by Paula M. Block & Terry J. Erdmann: Rules of Accusation!