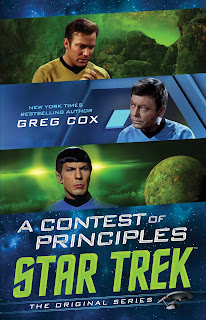 Purchase:
Trade Paperback: Amazon.com | Amazon.ca | Amazon.co.uk
E-book (Kindle): Amazon.com | Amazon.ca | Amazon.co.uk
The Enterprise crew is assigned as poll watchers for an important election taking place on the planet Vok. Kirk and the crew must contend with combative candidates, voter intimidation, and accusations of election meddling, all while doing their best to make sure the election is as fair and unbiased as possible. Meanwhile, Dr. McCoy is kidnapped by a neighboring planet for a vital medical intervention. Kirk sends Spock to investigate, unable to divert the Enterprise from her vital mission on Vok.
In this episode of the Positively Trek Book Club, hosts Dan and Bruce are joined by renowned Star Trek author Greg Cox to talk about his new Original Series novel, A Contest of Principles. We discuss the election day plot, McCoy’s kidnapping by Ozalor, Spock’s adventure on Braco, General Gogg’s election results, the intriguing ending with Admiral Komack, and we wrap up with where Greg can be found online and what he is working on now. 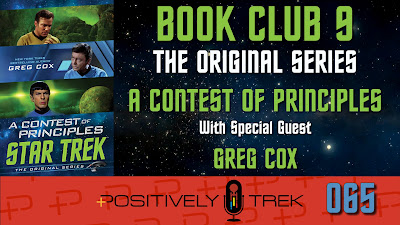 Previous episode: The Autobiography of Kathryn Janeway
Next episode: Deep Space Nine: Too Long a Sacrifice 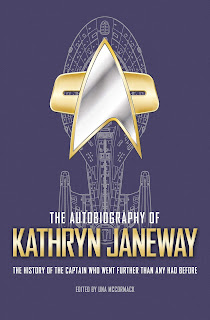 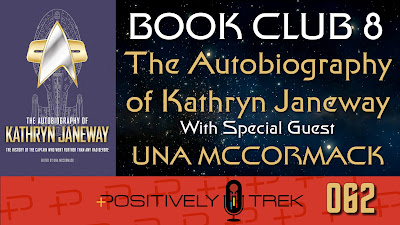 Release Day! TOS: A Contest of Principles by Greg Cox

Star Trek: The Original Series
A Contest of Principles
by Greg Cox

Once again, it's new Star Trek book day! Today is the official release date for the latest Star Trek: The Original Series novel: A Contest of Principles by Greg Cox.
Check out below for the back-cover blurb and links to purchase from Amazon! 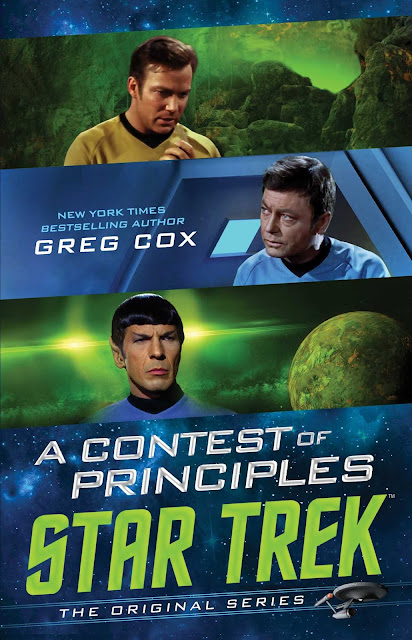 
An epic new Star Trek saga by New York Times bestselling author Greg Cox set during the original five-year mission!
The planet Vok is holding its first free elections after years of oppressive military rule. Captain James T. Kirk and the crew of the Starship Enterprise have been dispatched by Starfleet to serve as impartial observers, but remaining neutral proves a challenge, as Kirk confronts a tangled web of scandal, conspiracy, and assassination plots—with the stability of an entire sector at stake.
To make matters worse, Dr. Leonard McCoy has vanished while on a mission of mercy to Braco, a nearby planet only a system away. With Kirk unable to abandon his vital mission on Vok to hunt for his friend, it’s up to First Officer Spock and Christine Chapel to lead a team in search of the missing doctor, even if it means risking whatever fate befell McCoy.

Unknown to his friends and crewmates, however, McCoy has been spirited away to another world, Ozalor, where he’s expected to find a cure for a mysterious ailment plaguing a member of the planet’s ruling family. Torn between his Hippocratic oath and his desire to escape, McCoy finds himself at the center of deadly palace intrigues—and a struggle for power that may ultimately consume all three worlds!

Purchase A Contest of Principles:

Previous Release: The Autobiography of Kathryn Janeway
Next Release: Picard: The Dark Veil

Posted by Dan Gunther at 1:12 PM No comments: 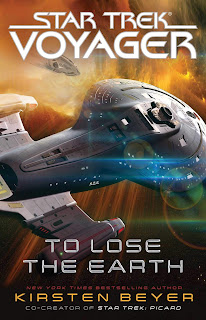 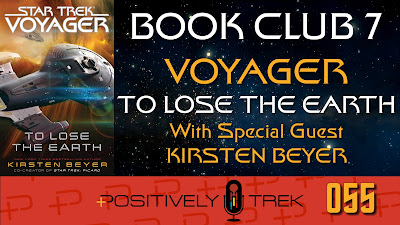 Posted by Dan Gunther at 9:44 PM No comments: