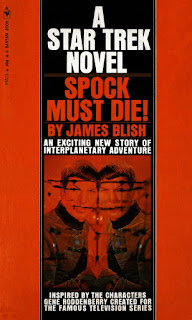 Purchase:
Paperback: Amazon.com | Amazon.ca | Amazon.co.uk
A transporter accident has presented Captain Kirk and the crew of the Enterprise a surprising mystery: two Spocks! But which is the original, and which is the copy with murderous intent?
In this special festive episode of the Positively Trek Book Club, hosts Dan and Bruce discuss the early Bantam Star Trek novel Spock Must Die! by James Blish. We talk about the novel’s unique place in the history of Star Trek fiction, a philosophical debate about the transporter, Spock vs. Spock, the Klingon threat, and wrap up with our final thoughts and ratings. 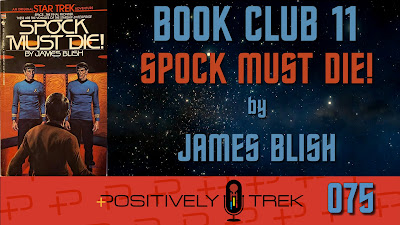 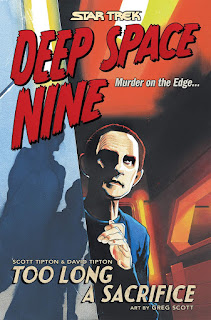 Purchase:
Trade Paperback: Amazon.com | Amazon.ca | Amazon.co.uk
E-book (Kindle): Amazon.com | Amazon.ca | Amazon.co.uk
It’s an Odo/Retlaw Buddy-Buddy Cop Show!
A string of seemingly-unrelated murders rocks Deep Space Nine, and it’s up to Security Chief Odo to solve the mystery. With Starfleet and the Bajoran government breathing down his neck, the Constable finds himself pulling in many different directions over the course of the investigation. The murders are just the latest effect of a deep mystery that stretches back to the days of the Cardassian occupation, one which Odo must solve before the death count rises…
In this episode of the Positively Trek Book Club, hosts Bruce and Dan discuss the four-issue Deep Space Nine miniseries Too Long a Sacrifice by Scott and David Tipton, with art by Glen Scott. We talk about all four issues, including our thoughts on the story, whodunnit, whether or not Worf acts out of character, and speculate on Garak’s guilt or innocence. We wrap up with our final thoughts and ratings on the series as a whole. 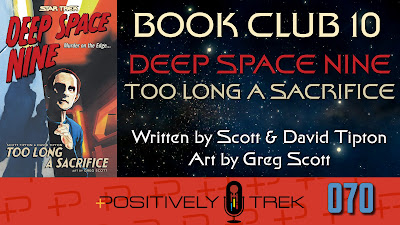 Previous episode: The Original Series: A Contest of Principles
Next episode: Spock Must Die!

Posted by Dan Gunther at 2:08 PM No comments: