Aboard the Starship Shenzhou, Lieutenant Michael Burnham, a human woman raised and educated among Vulcans, is promoted to acting first officer. But if she wants to keep the job, she must prove to Captain Philippa Georgiou that she deserves to have it.

Click here to watch my video review of Star Trek: Discovery: Desperate Hours, or click play on the embedded video below!

A story that features strong character moments and insights, not only for the Discovery characters Burnham, Saru, and Georgiou, but also for "special guest stars" Pike, Spock, and Una. A fairly typical Trek story plot-wise, but still very enjoyable and a fun adventure set aboard the U.S.S. Shenzhou. Four out of five stars!

Next up is the first Star Trek: Voyager original novel from 1995: The Escape by Dean Wesley Smith & Kristine Kathryn Rusch.

Posted by Dan Gunther at 1:10 PM No comments:

The Next Generation: Dark Mirror
by Diane Duane


In the year 2267, four Starfleet officers found themselves trapped in a strange alternate universe, a dark and deadly mirror of their own reality. There, a brutal empire ruled in place of the Federation, and advancement came through deceit and murder. Now, a century later, the crew of the Enterprise-D find themselves pulled into that same mirror reality, and this time they must work to prevent a full scale invasion of the prime universe!

In this episode of Literary Treks, hosts Bruce Gibson and Dan Gunther talk about the TNG novel Dark Mirror by Diane Duane. We discuss how the novel compares to other stories set in the mirror universe, a dolphin scientist named Hwii, his theory of hyperstrings, the evil and powerful Counselor Troi, the origins and nature of the mirror universe, Diane Duane's particular brand of technobabble, and wrap up with our final thoughts and ratings.

In the news section, we talk about the upcoming Autobiography of Mr. Spock, judge the cover of James Swallow's novel Star Trek: Discovery: Fear Itself, and discuss the news of the new comic miniseries, Star Trek: The Next Generation: Terra Incognita, coming later this year.


A strange planet with an enticing mystery is also the perfect destination for shore leave for the Full Circle fleet led by the U.S.S. Voyager. However, the mission to investigate this mysterious world may uncover a force that has the power to completely overwhelm the crews of the four Federation starships that comprise the fleet. Will the unintended consequences of the fleet's actions ultimately destroy them?

In this episode of Literary Treks, hosts Dan Gunther and Bruce Gibson are joined by guest host Matthew Rushing and New York Times bestselling author Kirsten Beyer to talk about her newest novel, Architects of Infinity. We discuss a medical situation that has ethical concerns for all involved, the nature of Kriosians and Ensign Aytar Gwyn's choices, Icheb's budding relationship, the plight of the junior officers aboard Voyager, a mystery that is way above the heads of even the brightest Starfleet officers, and an ending that left us all shocked. We also briefly touch on Kirsten's role as the media tie-in guru in the Star Trek: Discovery writers' room.

In the news segment, we talk about an April Fools' gag that briefly tricked us, the upcoming Incredibuilds Star Trek 3D wooden model kits with accompanying books written by author Dayton Ward, and review the first issue of the new Star Trek: Discovery Annual series written by Kirsten Beyer and Mike Johnson.

Hey all! We have an exciting cover reveal for you today: the third Discovery novel, due out in June of this year, titled Fear Itself and written by New York Times bestselling author James Swallow. Check out the cover art below, as well as the back-cover blurb and links to purchase from Amazon! 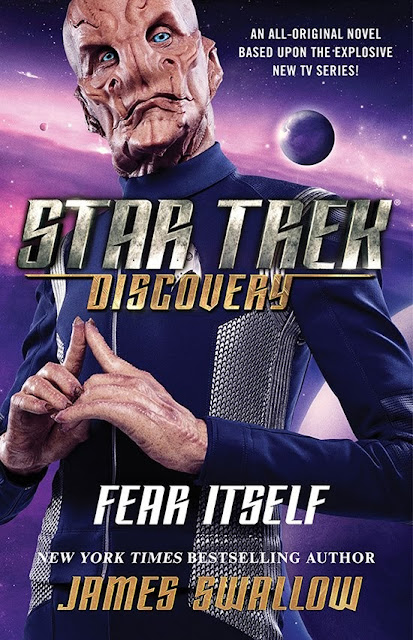 Lieutenant Saru is a Kelpien, a member of a prey species born on a world overrun by monstrous predators…and a being who very intimately understands the nature of fear. Challenged on all sides, he is determined to surpass his origins and succeed as a Starfleet officer aboard the U.S.S. Shenzhou.

But when Saru breaks protocol in order to prove himself to his crewmates, what begins as a vital rescue mission to save a vessel in distress soon escalates out of control. Forced into a command role he may not be ready for, Saru is caught between his duty and the conflicting agendas of two antagonistic alien races. To survive, he will need to seek a path of peace against all odds, and risk compromising the very ideals he has sworn to uphold….


Fear Itself is due to be released on June 5th in trade paperback and e-book formats. Here are some links to pre-order from Amazon!

Posted by Dan Gunther at 4:50 PM No comments:


In the final episode of Star Trek: Enterprise, fans were faced with a tragedy: the death of Commander Charles 'Trip' Tucker, a fan-favorite character. However, because the episode took place as a holodeck simulation, there was some leeway to interpret those events differently. Enter authors Andy Mangels and Michael A. Martin, who took that idea and ran with it, seeding the hints of Trip's ultimate fate in a novel set during Enterprise's third season.

In this episode of Literary Treks, hosts Dan Gunther and Bruce Gibson are joined by Warp 5's Brandi Jackola to talk about the Enterprise novel Last Full Measure. We discuss the plot of the novel, the conflict between the 'squids' and 'sharks,' a story of differing perspectives, Archer's ethical issues, Trip's ultimate fate, and wrap up with our final thoughts and ratings.

In the news segment, we talk about the impending end to John Byrne's New Visions series and review the latest Star Trek: Discovery comic, issue #3 of The Light of Kahless.

Posted by Dan Gunther at 2:50 PM No comments:

Spoilers ahead for By the Book!


In their first few weeks in space, Captain Jonathan Archer and the crew of the Enterprise have already discovered several new species and explored strange new worlds. But each planet brings new discoveries...and new dangers.

The Fazi, whose ultraregulated culture ranges from strict conversation protocols to unvarying building designs, inhabit half of a planet discovered by the Enterprise. But after a disastrous first contact with the ruler of the Fazi, Archer must depend on Vulcan science officer T'Pol and communication specialist Hoshi Sato to help him mend relations with the people of this planet, and unravel the mystery of the other creatures living on the world.

By the Book was the first original novel published for the new-at-the-time series Enterprise. As such, the authors faced unique challenges when crafting their story. Only having access to the first few stories from the series, Dean Wesley Smith and Kristine Kathryn Rusch had to put together a tale that still fit tonally with the series as well as try to capture the voices of the characters at a time when even the actors may not yet have found those voices. With all this in mind, I feel that they did a fairly remarkable job in capturing the feel of an early Enterprise story.

In many ways, By the Book feels a lot like a story that fits in Enterprise's first season. We have a crew that is quite green, encountering situations for the first time that would feel like old hat to later Star Trek crews. The Enterprise crew encounters a new civilization, one that is very alien from the crew's perspective. Archer's initial attempts to establish a dialogue with the newly-discovered alien race are predictably futile, and the overall encounter goes exactly as you would expect for an inexperienced commander and crew facing the unknown for the first time. While Archer's naivete and impulsiveness are a little too exaggerated for my tastes, it still fits in quite well with what we see in Enterprise's first season. Many of the themes that play out in the book, especially the idea of human impulsiveness versus Vulcan logic, are themes that the series itself regularly explored.


That said, there are a few issues in By the Book that jumped out at me. First was the small details that the authors didn't quite get right. For example, Elizabeth Cutler is referred to as an ensign in the novel, while she was actually a crewman in the episodes she appeared in during the series. Similarly, crewman Novakovich's first name is given as Alex, but in the episode "Strange New World," the events of which are referred to in By the Book, we learned his name is actually Ethan. Also, oddly enough, Hoshi Sato is often referred to as "Ensign Hoshi," while it should be "Ensign Sato." These are very likely not the fault of the authors, but are probably changed details between the initial scripts for these episodes and what finally ended up on film. Such is the danger of writing a novel so close to the start of the series!

The planet they explore is interesting enough; it turns out that this world is inhabited by two intelligent species, the mercurial and hard to understand humanoid Fazi, and a spider-like crustacean species called the Hipon. I enjoyed the progression of the first contact story, and the initial confusion when dealing with the Fazi was well-written. The twist with the Hipon was also interesting, and added some variation to what otherwise might be a fairly typical Star Trek exploration story.

There is also a b-plot to this story in which several crewmembers play an on-going tabletop RPG during their off hours. Reading other reviews online, many readers don't seem to like this part of the story. It is certainly true that it doesn't seem to have a lot to do with the main plot and does distract from the story at times, but I myself did enjoy it. I've never gotten into any RPGs before, but after reading this, I may have to give them a try. Perhaps the Star Trek Adventures RPG from Modiphius that came out last year?

A strong effort for the first original Enterprise novel. It's clear that there were a few things that weren't set in stone about the series at the time the novel was written, but the story ends up looking a lot more like the actual series than the first original Star Trek: The Next Generation novel resembled that series. Some of the characterizations are a bit off, and a b-plot seems fairly unconnected to the main narrative, but By the Book was still an enjoyable read for the most part.

More about By the Book:

Next up is my video review of Star Trek: Discovery: Desperate Hours by David Mack.

Posted by Dan Gunther at 2:06 PM No comments: