In Star Trek: Voyager's fourth season, a new character was introduced: Seven of Nine, a former Borg drone liberated from the Collective by Captain Janeway and her crew. Played by Jeri Ryan, the character was an immediate hit, so it only makes sense that the character would eventually be introduced into the Voyager tie-in novels being published at the time.

In this episode of Literary Treks, hosts Dan Gunther and Bruce Gibson welcome To the Journey's Suzanne Williamson to the show to discuss the Voyager novel Seven of Nine by Christie Golden. We talk about capitalizing on a new character, Annika Hansen and Seven's memories, the significance of the ravens, the Skedans and their vendetta against Emperor Beytek, ties to the wider lit-verse, and wrap up with our final thoughts and ratings.

In the news segment, we discuss the delays in the publication of Trek comics thanks to COVID-19. We also respond to feedback from The Babel Conference for Literary Treks 300: Miss Cleo's Just a Spectre!

Posted by Dan Gunther at 2:53 PM No comments:


The past returns to haunt Captain Jean-Luc Picard—a crime he thought long buried has been exposed, and he must return to Earth to answer for his role in a conspiracy that some call treason. Meanwhile, the U.S.S. Enterprise is sent to apprehend pirates who have stolen vital technology from a fragile Federation colony. But acting captain Commander Worf discovers that the pirates’ motives are not what they seem, and that sometimes standing for justice means defying the law….

Click here to watch my video review of Collateral Damage, or click play on the embedded video below!

An impressive wrap-up to a number of dangling threads from the Trek litverse, but with still more room to move the story forward from here. Some great moral lessons for the Federation at large, and repercussions for Jean-Luc Picard as well. I loved this novel, and I'm eager to discover where things go from here! David Mack has once again knocked it out of the park.

Next review will be for the Star Trek: Discovery novel Dead Endless by Dave Galanter. See you then!


Spoilers ahead for Mere Mortals!

On Earth, Federation President Nanietta Bacco gathers allies and adversaries to form a desperate last line of defense against an impending Borg invasion. In deep space, Captain Jean-Luc Picard and Captain Ezri Dax join together to cut off the Collective's route to the Alpha Quadrant.

Half a galaxy away, Captain William Riker and the crew of the Starship Titan have made contact with the reclusive Caeliar -- survivors of a stellar cataclysm that, two hundred years ago, drove fissures through the structure of space and time, creating a loop of inevitability and consigning another captain and crew to a purgatory from which they could never escape.

Now the supremely advanced Caeliar will brook no further intrusion upon their isolation, or against the sanctity of their Great Work....For the small, finite lives of mere mortals carry little weight in the calculations of gods.

But even gods may come to understand that they underestimate humans at their peril.

Star Trek: Destiny is a generations-spanning story, beginning in the early days before the formation of the Federation, and culminating in the 24th century with a massive attack by the Borg against the Federation, a conflict in which the very survival of civilization is at stake. Mere Mortals is the second book in the trilogy, following on from the previous book, Gods of Night.

At the planet New Erigol, the crew of the U.S.S. Titan encounter the Caeliar, an incredibly advanced species which the Starship Columbia had encountered two centuries earlier. The away team from the Titan is shocked to discover Captain Erika Hernandez, seemingly alive and well, living among the Caeliar. From her, we get the backstory of how she ended up there and what happened to her and her remaining crew in the intervening years. The story of Hernandez and her fellow crewmembers living among the Caeliar is heartbreaking and tragic. David Mack does a terrific job of getting into the heads of these characters and showing us the horror of their new reality, cut off from Earth and everything they love as they grow old in this alien environment.


Hernandez, now a being very much like the Caeliar, able to manipulate catoms out of which her body is now made, seems to exhibit a sort of Stockholm syndrome with regards to the Caeliar. "They don't mean to be evil," a line said by Vina in the original Star Trek pilot episode "The Cage," would not be out of place if said by Hernandez here. However, not everything is as it seems, and it appears as though there might still be some of that fighting spirit left in the captain.

While all of this is going on, there is also the "larger universe" story happening. In Paris, the Federation president, Nan Bacco, is attempting to build a coalition to oppose the Borg. I enjoy explorations of politics in my Star Trek, and these parts of the novel don't disappoint. I love the strategizing that Bacco has to do in order to build her coalition, and I was reminded of some of my favorite political maneuverings from episodes of The West Wing.

Meanwhile, the starships Enterprise and Aventine have been scouting a number of subspace tunnels within the Azure nebula. These apertures were created by the Caeliar, and it is believed the Borg have been using one of them to attack the Federation. One by one, they are exploring the tunnels and reporting back to the nebula, awaiting the fleet that President Bacco has assembled to reinforce them. At the terminus of one particular tunnel, the Enterprise encounters a Hirogen hunting party, and the attack that the Hirogen mount against the ship is brutal. There are some incredible action scenes in this part of the story, and David Mack keeps me on the edge of my seat throughout.


While Destiny could be described as a plot-heavy trilogy with huge action set pieces, it's the character work in these novels that really make them stand out to me. So while yes, the Federation is facing an existential crisis, through it all we have smaller stories such as Deanna Troi and Will Riker experiencing a difficult pregnancy. Troi is on the away team to New Erigol, and experiences complications during the mission. Dr. Ree, the Titan's chief medical officer, has accompanied the team and must find a way to safeguard Troi's life. His particular brand of medicine leads to a huge misunderstanding as to his motives, when it suddenly appears as though he has attacked Troi.

Similarly, another great bit of characterization comes in the form of Lieutenant Melora Pazlar and Dr. Ra-Havreii. I love the psychology of what these characters are going through, and there is a terrific exploration of the motivations of each of these characters and how they deal with emotional trauma and obstacles. For me, Star Trek is at its best when it is less about the huge, galaxy-shaking events and more about the personal struggles of the characters and what it means to be a person. Destiny manages to balance these two demands on the story brilliantly.

Because this is book two of three, Mere Mortals must end on a cliffhanger of some sort. At the end of the novel, the Enterprise and the Aventine escape back through a subspace aperture just as it is being shut down by the Caeliar. In the Azure Nebula, they see the remnants of the allied fleet, smashed through by the Borg, who have deployed over 7400 ships into Federation, Klingon, and Romulan space. Meanwhile, at New Erigol, Hernandez appears on the bridge of the Titan, telling Riker they have one chance to escape, but he has to decide now. Having witnessed the destruction of the fleet by the Borg, Riker wants to join the fight. Leaving behind the captive away team, including his wife, Riker decides to allow the Titan to escape with Hernandez. An incredibly action-packed finale to the novel, which has me eager to pick up book three as soon as possible!

An amazing balance between the huge, apocalyptic big-picture events and the smaller character moments that are at the heart of this novel. As the middle novel in a trilogy, the danger exists that it could feel like it is treading water or acting as "filler," but that is never the case with Mere Mortals. This entire trilogy is tightly plotted, using all of its characters to its advantage to tell a meaningful, heartfelt story. A wonderful middle chapter in this epic Star Trek trilogy by a masterful author.

Next up is my video review of the TNG novel Collateral Damage by David Mack. Stay tuned for more!

Posted by Dan Gunther at 2:18 PM No comments: 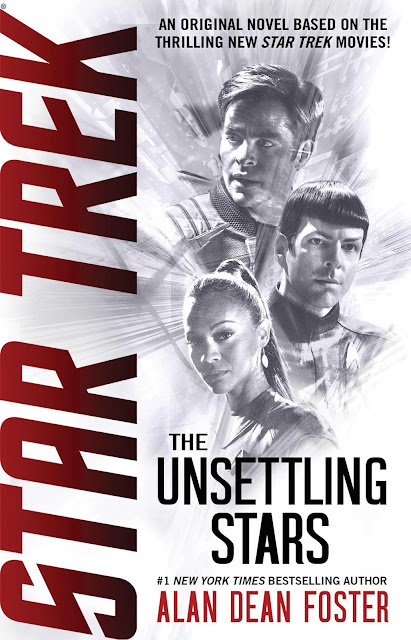 Posted by Dan Gunther at 9:59 AM No comments:


Mysterious armored warriors have reduced the Aenar population to nearly zero. Captain James T. Kirk and the crew of the Enterprise must investigate this brutal and seemingly unprovoked attack with the help of Miranda Jones and the Medusan ambassador, Kollos. However, the situation escalates when the targets of the mysterious attackers expands to include other telepaths, including members of the Enterprise crew. Can the mystery surrounding these dangerous warriors be solved before more lives are lost?

In this episode of Literary Treks, hosts Bruce Gibson and Dan Gunther discuss the new TOS novel The Higher Frontier by Christopher L. Bennett. We talk about Commander Thelin and the Aenar, the "New Humans," a sequel to "Is There in Truth No Beauty?," the war between the Spectres and the Lords, parallels to hate groups here on Earth, ending the novel on a hopeful note, some fun references from the author, and wrap up with our final thoughts and ratings.

In the news segment, we talk about the recently announced TOS novel, A Contest of Principles by Greg Cox. We also respond to listener feedback from The Babel Conference for Literary Treks 299: We Need a Kick in Our Complacency.