Sunscreen? Check. Klingon etiquette guide? Check. Marc Okrand's Klingon Dictionary? Check. You're all set for your ultimate vacation to the Klingon homeworld! There's just one more book you should remember to bring in order to make your holiday an honorable one...

In this milestone episode of Literary Treks, hosts Dan Gunther and Bruce Gibson are joined by Dayton Ward to talk about his latest work, the Hidden Universe Travel Guide to The Klingon Empire! We discuss the research that went into the book, where Dayton got his ideas, the connections to the Star Trek novelverse, some great places for food and drink on Kronos, dos and don'ts while traveling in the Klingon Empire, and wrap up with what Dayton is currently working on.

In the news, Dayton joins us to discuss his upcoming Star Trek: Discovery novel, highlights from the Las Vegas Star Trek convention, and we end up having a bit of surprise wordplay fun with a book release from 2016 that we forgot to cover in a previous episode!

Posted by Dan Gunther at 9:14 AM No comments:

Release Day! Rise of the Federation: Patterns of Interference

After a little bit of a drought with no new Trek novel releases, our long wait is finally over with the release of Rise of the Federation: Patterns of Interference, the latest Star Trek: Enterprise novel by Christopher L. Bennett! As has been the case lately, the novel is showing up early in bookstores everywhere, so keep your eyes peeled. As always, I have links below to purchase Pattern of Interference from Amazon if you would prefer! 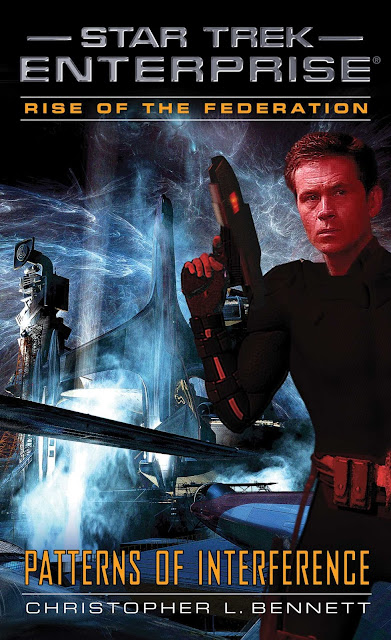 
The saga of the Star Trek: Enterprise TV series continues with this thrilling original novel!

The time has come to act. Following the destructive consequences of the Ware crisis, Admiral Jonathan Archer and Section 31 agent Trip Tucker both attempt to change their institutions to prevent further such tragedies. Archer pushes for a Starfleet directive of non-interference, but he faces opposition from allies within the fleet and unwelcome support from adversaries who wish to drive the Federation into complete isolationism. Meanwhile, Tucker plays a dangerous game against the corrupt leaders of Section 31, hoping to bring down their conspiracy once and for all. But is he willing to jeopardize Archer’s efforts—and perhaps the fate of an entire world—in order to win?

Purchase Enterprise: Rise of the Federation: Patterns of Interference


What if our actions are not our own? What if all of us are merely pawns in a universe-spanning game, controlled by vastly older races with agendas and motivations that remain obscured? How would we know? And, most importantly, how would the mighty Captain Kirk deal with them?

In this episode of Literary Treks, hosts Dan Gunther and Bruce Gibson talk about the Shatnerverse novel Preserver. We discuss the nature of the Preservers, fate versus free will, duplicate Earths, secret groups within the Federation, the two Kirks, Teilani, and wrap up with our final thoughts and ratings.

In the news segment, we talk about Star Trek comic news from SDCC and review issue #10 of Boldly Go.

Posted by Dan Gunther at 2:27 PM No comments:

Star Trek: The Next Generation #48
The Q Continuum Book 2 of 3
Q-Zone by Greg Cox


As the Enterprise holds her own against a swarm of energy creatures determined to keep the crew from completing their mission, Q leads Picard on a journey through his past, where a force even greater than Q and with an even wider cruel streak wreaks havoc on the galaxy.

In this episode of Literary Treks, hosts Bruce Gibson and Dan Gunther are joined once again by Earl Grey's Amy Nelson to discuss the second book of the Q Continuum series, Q-Zone. We talk about stardate snafus, peer pressure, bad parenting, 0's gang of evil-doers, the end of the TKon Empire, and wrap up with our final thoughts and ratings.

In the news segment, we discuss the upcoming e-book release, I, The Constable by Paula Block and Terry Erdmann, a new activity book called Search for Spock by Robb Pearlman, a resolution to the issue with Discovery novel pre-orders at Amazon UK, and we talk about the IDW comic releases for October, including some news about the Star Trek: Discovery comics.

Books and Comics News From STLV17!


Click here to watch the video on YouTube, or click the embedded player below for exciting news about Star Trek: Discovery comics and books, as well as some surprising news regarding the upcoming Pocket Books Star Trek book schedule!


Garak has gone from spy to revolutionary to ambassador to castellan of the Cardassian Union in just a few short years. In that time, Cardassia has changed immensely. But the people of Cardassia still share a lot of guilt, and ghosts of the past may be rising again to ruin the lives of some of Cardassia's finest. Now, it is up to Dr. Kate Pulaski to discover the truth before it is too late!

In this episode of Literary Treks, hosts Dan Gunther and Bruce Gibson are joined by New York Times bestselling author Una McCormack to talk about her new novel, DS9: Enigma Tales. We discuss the plot, the characters, some historical touchstones that the story parallels, the nature of Cardassian enigma tales, the state of Dr. Bashir, and wrap up with Una's upcoming projects and where you can find her online. Please note: the first part of the feature is spoiler-free, and we get into spoilers for the second half.

In the news segment, we have a link to a short supplemental to Dayton Ward's Klingon Travel Guide: "7 Common Offworlder Questions Klingons Are Tired of Hearing."

Posted by Dan Gunther at 8:30 PM No comments: