Once again, the new Star Trek novel has been showing up early on bookshelves all over the place, so there's a chance you have already picked up your copy of Deep Space Nine: Enigma Tales by Una McCormack! Her work is always outstanding, especially when she is writing about everyone's favorite plain and simple tailor-turned-Castellan, Garak!

Check out the back cover blurb below, and use the links to purchase Enigma Tales from Amazon! Using those links helps out Trek Lit Reviews, and it is much appreciated. 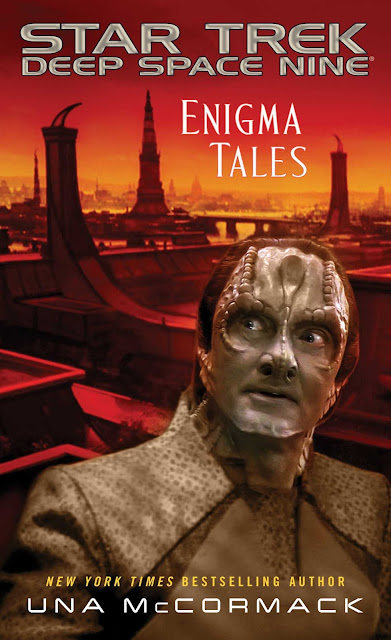 
From the New York Times bestselling author of The Fall: The Crimson Shadow comes a compelling and suspenseful tale of politics and power set in the universe of Star Trek: Deep Space Nine.

Elim Garak has ascended to Castellan of the Cardassian Union...but despite his soaring popularity, the imminent publication of a report exposing his people's war crimes during the occupation on Bajor looks likely to set the military against him. Into this tense situation come Dr. Katherine Pulaski—visiting Cardassia Prime to accept an award on behalf of the team that solved the Andorian genetic crisis—and Dr. Peter Alden, formerly of Starfleet Intelligence. The two soon find themselves at odds with Garak and embroiled in the politics of the prestigious University of the Union, where a new head is about to be appointed. Among the front-runners is one of Cardassia’s most respected public figures: Professor Natima Lang. But the discovery of a hidden archive from the last years before the Dominion War could destroy Lang’s reputation. As Pulaski and Alden become drawn into a deadly game to exonerate Lang, their confrontation escalates with Castellan Garak—a conflicted leader treading a fine line between the bright hopes for Cardassia’s future and the dark secrets still buried in its past...

Previous Release: Department of Temporal Investigations: Shield of the Gods
Next Release: Enterprise: Rise of the Federation: Patterns of Interference