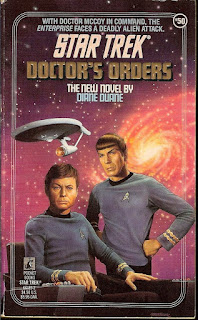 For a ship's surgeon, Dr. McCoy tends to spend an awful lot of time on the bridge of the Enterprise, usually grousing to Captain Kirk about his command decisions. The tables are turned on the good doctor when Kirk decides to leave him in command while visiting an alien world. However, when Captain Kirk disappears, McCoy must remain in command until he is found. Will the doctor find himself in over his head?

In this episode of Literary Treks, hosts Bruce Gibson and Dan Gunther discuss the classic Diane Duane novel Doctor's Orders. We talk about McCoy's command style, the three species of the planet Flyspeck, when the story is set, Diane Duane's fascination with starship maneuvers, the fact that the grass isn't always greener on the other side, and wrap up with our final thoughts and ratings.

In the news segment, we talk about Christopher L. Bennett's annotations for his novel The Face of the Unknown and review two comics: Boldly Go #8 and Waypoint #5.