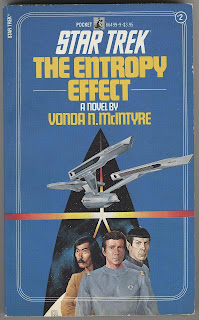 When Captain Kirk is killed in a vicious attack, Spock must navigate his way through an impossible time-bending paradox to get to the bottom of the mystery of what happened. However, it is not only Captain Kirk's life that hangs in the balance, but the fate of the entire universe!

In this episode of Literary Treks, hosts Dan Gunther and Bruce Gibson are joined once again by Brandon Shea-Mutala to discuss the first Pocket Books original Star Trek novel, The Entropy Effect by Vonda N. McIntyre. We talk about our first experiences with the novel, Sulu's role in the story, Captain Hunter and her fighter squadron, links between this story and Star Trek Into Darkness, a convoluted time-twisting plot, and wrap up with our final thoughts and ratings.

In the news segment, we talk about the Star Trek authors who have been nominated for this year's Scribe awards, judge the cover of the upcoming Rise of the Federation: Patterns of Interference, and review two comics: Star Trek/Green Lantern: Stranger Worlds #6 and TNG: Mirror Broken #1.