The Next Generation: Hearts and Minds
Exclusive interview with author Dayton Ward! 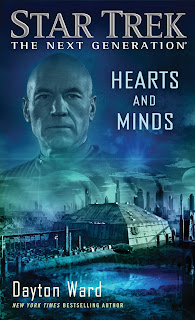 Captain Picard and the crew of the Enterprise encounter an alien world with a dark link to Earth's past. When the captain and his away team are arrested for crimes supposedly committed by a sinister agency in the 21st century, it's up to them to discover the truth about what happened. Did travellers from Earth cause millions of deaths on a planet hundreds of light-years away?

In this episode of Literary Treks, hosts Dan Gunther and Bruce Gibson are joined by author Dayton Ward to discuss his new novel, Hearts and Minds. We talk about the History's Shadow trilogy, Taurik and Admiral Akaar, alt-fact history, Dayton's research methods, Captain Picard's future in Starfleet, ask some questions posed by listeners, and end with Dayton's upcoming projects.

In the news segment, Dayton Ward talks about his upcoming Klingon Travel Guide, reveals that both it and the Vulcan guide will soon be available in e-book format as well, and we discuss the upcoming Star Trek Adventures table-top RPG.