The Next Generation #1: Ghost Ship by Diane Carey 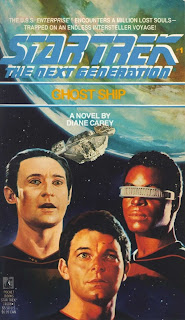 On Literary Treks, we have reviewed the first original novel of each of the Star Trek series. Now it's time for our attention to turn to The Next Generation, and a very unique novel that shows us a take on TNG that was written with very little of the actual show to work with. Is the story representative of what we would come to know from the crew of the Enterprise-D, or is it a pale reflection that is nearly unrecognizable?

In this episode of Literary Treks, hosts Bruce Gibson and Dan Gunther talk about TNG #1: Ghost Ship by Diane Carey. We discuss our first experiences with the book, the plot of the novel, how closely the characters match their on-screen counterparts, our thoughts on the main conflict, and wrap up with our final thoughts and ratings.

In the news segment, we judge the cover of the upcoming DS9: Original Sin, discuss the upcoming books Star Trek Beyond – The Makeup Artistry of Joel Harlow, The Art of Star Trek: The Kelvin Timeline, and the second volumes of Dark Horse's Star Trek Adult Coloring Books. We also review two comics: New Visions #16 and Boldly Go #9.