Another new cover to reveal, with an extra little surprise! Coming at the end of September is David R. George III's newest novel, Original Sin. Ostensibly under the Deep Space Nine banner, Original Sin also carries the additional series title Gamma, indicating the start of a possible series or mini-series of books dealing with Captain Sisko's mission in the Gamma Quadrant commanding the U.S.S. Robinson. In any case, it's a stunning cover, showcasing the Robinson and some sort of alien-looking objects. Check out the cover art below as well as the back-cover blurb and links to pre-order Original Sin from Amazon! 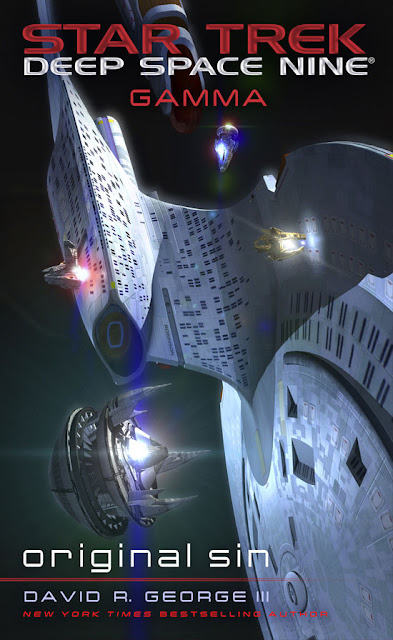 At the end of 2385, in a significant shift of its goals from military back to exploratory, Starfleet sent Captain Benjamin Sisko and the crew of the U.S.S. Robinson on an extended mission into the Gamma Quadrant. Tasked with a years-long assignment to travel unknown regions, they set out to fulfill the heart of Starfleet’s charter: to explore strange new worlds, and to seek out new life and new civilizations.