Spoilers ahead for Doors Into Chaos and the Gateways miniseries!


From the back cover:

More than 200,000 years ago, the ancient Iconians created a network of interdimensional Gateways providing instantaneous transportation across unimaginable distances.  Once known as the "Demons of Air and Darkness," the Iconians mysteriously vanished many millennia ago, never to return -- or so it was believed.

Summoned to an emergency briefing at Starfleet Headquarters, Captain Jean-Luc Picard is stunned to discover that the legendary Iconians have returned at last, and are offering to sell the secrets of their advanced technology to the Federation.  To prove their sincerity, they have reactivated their long-abandoned Gateways, but the results have been strife and chaos throughout the entire Alpha Quadrant.  Now Picard and his crew must contend with feuding Klingons and Romulans as the captain seeks to discover the sinister truth behind the Iconians' unexpected rebirth!

The entire galaxy is in crisis.  All across the Alpha Quadrant and beyond, the Iconian Gateways have been switched on.  Many people are becoming displaced, and even starships have become lost through larger, space-based gateways.  With emergencies springing up across the quadrant, Starfleet summons its top captains to a meeting in order to resolve the issue.  The Enterprise is assigned to stop a dispute between the Deltans and the Carreons, who have both used gateways to travel to a disputed world, each side claiming it as their own.  Meanwhile, Captain Picard is assigned command of the USS Marco Polo in order to petition various governments to join a fleet to confront the aliens who are claiming to be the long-missing Iconians, the "Demons of Air and Darkness" of legend.  While Picard is not successful with every government he contacts, he and Deanna Troi are able to rally the Gorn, the Ferengi, the Klingons, and the Romulans to thier cause.  Joining them is a displaced starship from the Delta Quadrant, crewed by a race called the Nyrians, originally seen in the Voyager episode "Displaced."

Together, along with the Enterprise and representatives from the Deltan and Carreon fleets, they approach the Iconians to talk.  However, the "Iconians" take the opportunity to open fire on the fleet.  As Picard and Starfleet suspected, these "Iconians" are not Iconians at all, but rather the Petraw, who are masquerading as the ancient race in order to sell the Gateway technology to the highest bidder.

Not a bad start to the twenty-fourth century portion of the Gateways series.  I enjoyed the mission briefing at the beginning, in which we see all of the lead characters from the various series involved in this part of the story "holo-conferencing": Captain Picard from TNG, Colonel Kira and Commander Vaughn from DS9, and Captains Calhoun and Shelby from New Frontier.  The galaxy-wide crisis is an interesting hook, and serves well as the catalyst for this series-spanning adventure.

Doors Into Chaos does a good job of presenting the differing views and motivations of the members of Picard's fleet.  The one problem I had was with the motivation for the actions of the Petraw.  When they are confronted by the armada, they simply open fire, rather than trying to talk their way out of it.  I would have thought that they would maintain the pretense of being the Iconians and attempting to bluff the fleet further.

Some interesting "fish-out-of-water" scenarios present themselves in Doors Into Chaos.  We get to see Counselor Troi in command of a starship, something I've been curious about since she took the bridge officer's exam in season seven of TNG.  Of course, reference is made to her crashing of the Enterprise-D's saucer section in Generations.  Also, we get to see Worf acting in his ambassadorial role, after being made the Federation diplomatic representative to the Klingon homeworld in DS9's final episode.  Both are interesting to watch, but one can see the reasons for Worf's return to Starfleet sometime before Star Trek Nemesis.

Some issues with the motivations of the "Iconians," but I'm hoping we learn more in the other books of the series.  The crisis involving Starfleet makes me wonder about the stories in the Gateways series that don't involve this particular issue.  I'm hoping they don't come across as superfluous and unnecessary.  Chainmail was entertaining, but ultimately irrelevant to the rest of the series.  I don't think this is a bad thing, but it could turn many readers off.  As with the other books, the cliffhanger ending is a little annoying, but interesting enough for me to read the final volume.

I am on vacation in Thailand and Cambodia for the next couple of weeks, so the blog might not get updated frequently in that time.  I will, however, be reading a lot, and I've just finished the Deep Space Nine entry in the Gateways series, Demons of Air and Darkness.  Hopefully I can provide that review soon! 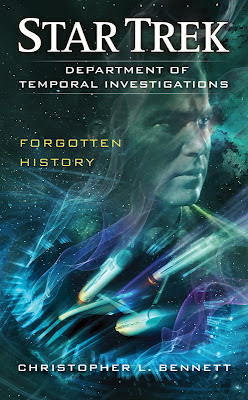 This news is a few days old, but I felt like sharing it anyway.  Pocket Books has released the back cover blurb for Christopher L. Bennett's upcoming Star Trek: Department of Temporal Investigations: Forgotten History:

The agents of the Department of Temporal Investigations are assigned to look into an anomaly that has appeared deep in Federation territory.  It's difficult to get clear readings, but a mysterious inactive vessel lies at the heart of the anomaly, one outfitted with some sort of temporal drive disrupting space-time and subspace.  To the agents' shock, the ship bears a striking resemblance to a Constitution-class starship, and its warp signature matches that of the original Federation starship Enterprise NCC-1701--the ship of James T. Kirk, that infamous bogeyman of temporal investigators, whose record of violations is held up by DTI agents as a cautionary tale for Starfleet recklessness toward history.  But the vessel's hull markings identify it as Timeship Two, belonging to none other than the DTI itself.  At first, Agents Lucsly and Dulmur assume the ship is from some other timeline ... but its quantum signature confirms that it came from their own past, despite the fact that the DTI never possessed such a timeship.  While the anomaly is closely monitored, Lucsly and Dulmur must search for answers in the history of Kirk's Enterprise and its many encounters with time travel--a series of events with direct ties to the origins of the DST itself ...


Forgotten History is the second novel in the Department of Temporal Investigations series.  The first novel, Watching the Clock, was released last year.  You can read my review of it here.  Forgotten History is due to be released at the end of April 2012.  You may pre-order it from Amazon.com by clicking here.

Posted by Dan Gunther at 8:35 PM No comments:

The Rings of Time

Previous book (The Original Series): A Choice of Catastrophes

Next book (The Original Series): That Which Divides


Possible spoilers ahead for The Rings of Time!

2020: The U.S.S. Lewis & Clark, under the command of Colonel Shaun Christopher, sets off on humanity's first manned mission to Saturn.  But the unexpected presence of a stowaway complicates the mission--as does a startling encounter with an alien probe.  But when Colonel Christopher attempts to capture the probe, he suddenly finds himself transported across time and space to a future era of space exploration...

Stardate 7103.4: The U.S.S. Enterprise responds to an urgent distress call from a mining colony orbiting Klondike VI, a ringed gas giant not unlike Saturn.  For unknown reasons, the planet's rings are coming apart, threatening the safety of the colony and its inhabitants.  Searching for a way to avert the disaster, Captain James T. Kirk and his crew investigate a mysterious alien probe that has just entered the system.  But when the probe is beamed aboard, Kirk abruptly finds himself floating in space above Saturn, wearing an old-fashioned NASA spacesuit, with the Enterprise nowhere in sight...

Two missions.  Two crews.  And a time-twisting crisis that spans the centuries...

The Rings of Time begins by chronicling two separate adventures: in the year 2020, Colonel Shaun Christopher sets off for Saturn aboard the Lewis & Clark with his two fellow astronauts, Alice Fontana and Marcus O'Herlihy, along with a stowaway, who identifies herself as Zoe.  An internet blogger, Zoe has apparently sneaked aboard the Saturn-bound ship in order to get the "inside scoop" on the "real reason" NASA is sending a mission to Saturn.  Meanwhile, in the twenty-third century, Captain Kirk and the Enterprise deal with a catastrophe in progress.  Klondike VI, a Saturn-like planet, is threatening an orbiting Federation mining colony due to the collapse of its rings.  The crew is running out of time to save the colony and attempt to discover why this collapse is happening.

In 2020, the same phenomenon is happening to Saturn; the rings begin to collapse inward, destabilizing and falling towards Saturn's atmosphere.  The Lewis & Clark mission is investigating this phenomenon, as well as a comet that is to pass closely to Saturn during the mission.  When the comet arrives, it reveals itself to be a probe of unknown origin.  In an attempt to retrieve it, Colonel Christopher goes on a spacewalk.  When he comes into contact with the probe, there is a flash, and he finds himself in the body of Captain James T. Kirk in the year 2270.  Similarly, a probe arrives at Klondike VI and is beamed aboard the Enterprise.  When Captain Kirk reaches out to touch it, he suddenly finds himself floating in space in 2020, inhabiting the body of Christopher.

Captain Kirk must play Colonel Christopher's role in history while maintaining his cover, without disrupting the timeline to a significant degree.  Meanwhile, in the year 2270, the crew of the Enterprise must find a way to save the people of the Skagway colony while coping with the apparent loss of their captain.

All in all, quite enjoyable!  It was interesting to get some insights into the "near future," and the setting allowed a few modern references to be made, while engaging in some limited speculation about the years to come.  A couple of times, I thought to myself, "this is too far in the future for them to be talking about (Steve Jobs, Lady Gaga, etc.)"  Then I realized that 2020 is only eight years away!  It's hard to believe that it's already 2012.  I feel old all of the sudden.

I did think that the ending of The Rings of Time was a little too pat.  As I was nearing the end of the book, I kept wondering to myself how Greg Cox was possibly going to wrap up the story-lines in a satisfying way.  For the most part, he succeeds, but I still came away feeling like it wrapped up a little too easily.

For the most part, The Rings of Time was satisfying, a nice fix of original Star Trek.  It was nice to have the exploration of part of Trek history that hadn't previously been featured.  While there are differences in the ages of the characters, it was nice to be able to feature (in my head) actor Roger Perry in the role of Colonel Shaun Christopher, after having already been introduced to his father in the original Star Trek episode "Tomorrow is Yesterday."  Not perfect, with an ending that's a little too convenient and pat, but a fun and exciting story nonetheless!


More about The Rings of Time:

Continuing with my reading of the Gateways series, I'm tackling Doors Into Chaos by Robert Greenberger next.
Posted by Dan Gunther at 4:53 AM No comments: