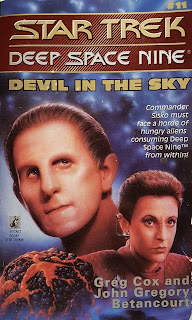 Purchase:
Mass-market paperback: Amazon.com | Amazon.ca
E-book (Kindle): Amazon.com | Amazon.ca
Hortas… IN SPAAAACE!!!
In the classic Trek episode “The Devil in the Dark,” we are introduced to the Horta: a strange, non-humanoid being whose fearsome aspect belies a gentle creature, only interested in protecting her many vulnerable young. However, while peaceful, the Horta is capable of great destruction thanks to its silicon-based physiology and its ability to spew highly concentrated, deadly acid. So what do you think might happen when twenty young Horta are suddenly released into the sealed environment of a space station?
In this episode of the Positively Trek Book Club, hosts Bruce Gibson and Dan Gunther discuss the Deep Space Nine novel Devil in the Sky by Greg Cox and John Gregory Betancourt. We talk about the origin of the novel, the premise, Jake and Nog’s role in the crisis, the characterizations of the DS9 crew, Kira’s rescue mission, the solution to the Horta problem, and wrap up with our final thoughts and ratings. 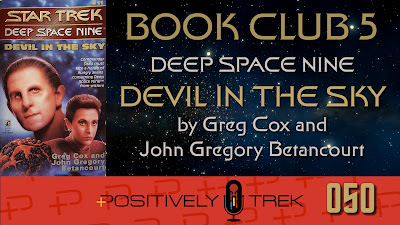