We have more new cover art just revealed thanks to StarTrek.com! This time, we get a sneak peek at February's e-book release, Miasma by Greg Cox!

As always, look below for the back-cover blurb and links to pre-order from Amazon. You'll be helping us out here at Trek Lit Reviews by pre-ordering Miasma! 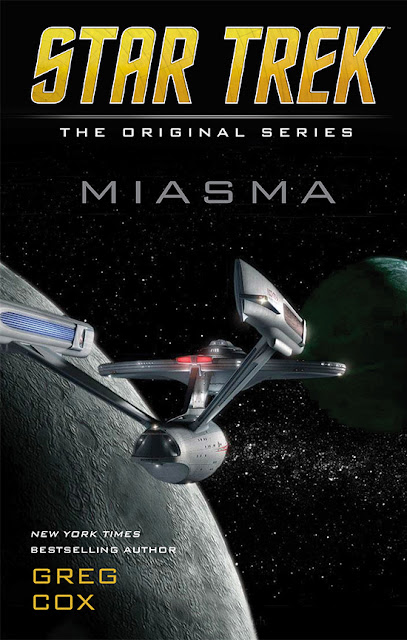 
The Enterprise-A is transporting a party of diplomats when it picks up a mysterious alien signal emanating from a nearby world. The planet’s dense, impenetrable atmosphere makes it unclear if the beacon is a distress signal, an invitation--or a warning to stay away.  Spock, Doctor McCoy, and Chekov are part of a team sent to investigate, but an unexpected catastrophe forces a crash landing.  Now the landing party is stranded on a hostile world, and unable to communicate with the Enterprise. While Captain Kirk and Saavik race to find a way to locate the lost crew, a badly wounded Spock struggles to keep McCoy and the others alive until they can be rescued, even if that means making an unthinkable sacrifice.