Literary Treks 127: Cardassian Out of the Bag 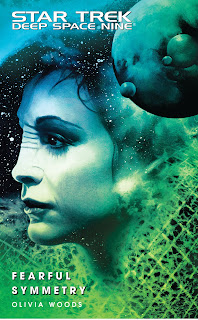 Deep Space Nine was the first Star Trek series since the original to make use of the Mirror Universe, and as the relaunch series worked its way toward telling the showdown with the Ascendants, a wrinkle was thrown in as Iliana Ghemor from the prime universe was revealed to be the one behind Taran'atar's recent madness. However, that was only the beginning of her diabolical plan to become the only Kira in the multiverse!

In this episode of Literary Treks, hosts Matthew Rushing and Dan Gunther talk about Fearful Symmetry. We discuss a couple quick notes, the gimmick, the "present day" story, the backstory, fanning the flames of fanaticism, the Sisko, and our ratings. We also have a few thoughts on how the recently announced new television series might affect the books.

In the news segment, we look at Star Trek: Hollow Man, the latest New Visions photo comic by John Byrne.

Previous episode: Literary Treks 126: From a Certain Point of View