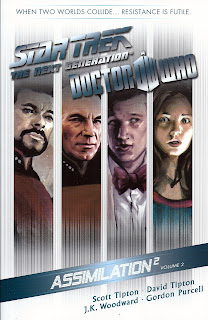 Doctor Who and Star Trek both continue to delight fans and create new converts even though they have both been around for 50 years. As each new generation finds them, the inevitable question becomes: "What would happen if the two shows crossed over?" Luckily, comics have stepped in to answer that question!

In this episode of Literary Treks, hosts Matthew Rushing and Dan Gunther talk about the Star Trek/Doctor Who crossover comic Assimilation²: Volume 2. We discuss Dan's progression through Doctor Who, a shift in the comic series, fun things, negotiating with the Borg, the ending, and some things we liked and didn't.

In the news segment we mention a few interesting celebrations.

Previous episode: Literary Treks 127: Cardassian Out of the Bag