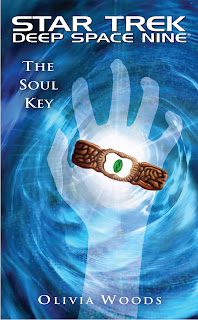 When the Deep Space Nine relaunch began in 2001, readers were treated to a great series of stories that laid the groundwork for the shared continuity of the 24th century novels. Unfortunately, the ongoing story of DS9 under Captain Kira came to an unexpected halt with The Soul Key, the final novel before the narrative was jumped forward to catch up with the rest of the shared universe.

In this episode of Literary Treks, hosts Matthew Rushing and Dan Gunther talk about The Soul Key. We discuss the end, a convoluted plot, Ghemor and her plot, characters we know and love, forgotten characters, comparisons, the cover, and our ratings.

In the news segment, we talk about Ongoing #52 and Star Trek/Green Lantern #6.

Next episode: Literary Treks 133: Brother From Another Mother