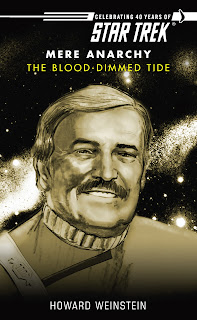 The Mere Anarchy series has given fans a taste of what was happening in every period of the Original Series timeline as well as the important events in each of the characters lives. The penultimate book in the series is no exception.

In this episode of Literary Treks, hosts Matthew Rushing and Dan Gunther talk about The Blood-Dimmed Tide. We discuss Mestiko becoming a focal point, the oversight issue, bureaucracy, setting up the milieu of The Undiscovered Country, the Klingon Empire as a metaphor, Kirk's prejudice, frustration, and our ratings.

In the news segment, we talk about the new covers and blurbs for Elusive Salvation and Live by the Code, the German Prometheus trilogy, and Doug Drexler's upcoming covers for the Prey trilogy.