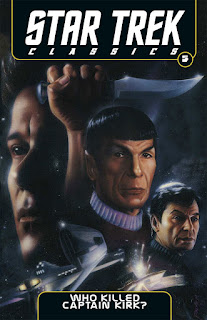 Comics have been an integral part of Star Trek, from the first Gold Key Comics in 1967 to Marvel Comics which picked up the license in 1979 and ran until 1982. After that, DC Comics continued the adventures of the Enterprise with writers like Diane Duane and Peter David.

In this episode of Literary Treks, hosts Matthew Rushing and Dan Gunther talk about Peter David's Who Killed Captain Kirk?. We discuss old comic series, Aspiring to Angels, taking a turn, confusion, a Kirk question, an interesting conversation, a wedding, Dante's Inferno, You're Dead, Jim!, another shift, Finnegan, ratings, and our final thoughts.