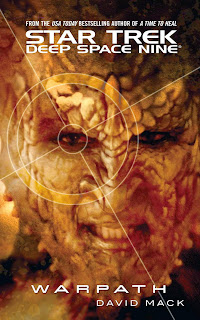 Deep Space Nine was the one Star Trek series that was not afraid to show the darker side of the universe, so it should come as no surprise to readers of the relaunch novels that the books continued that tradition as the story continued to unfold.

In this episode of Literary Treks, Matthew Rushing and Dan Gunther talk about David Mack's book Warpath. We discuss going from bad to worse, lack of direction, main characters that aren't main, Prynn and Vaughn, setup syndrome, a trip to Bajoran Minis Tirith, and our ratings.

In the news segment, we judge the cover to James Swallow's upcoming book The Latter Fire and talk about the latest issue of Star Trek/Green Lantern and Ongoing's 50th issue.

Next episode: Literary Treks 126: From a Certain Point of View