Hi Folks, I have a beautiful new piece of cover art to share with you today, thanks to StarTrek.com. Coming next year is the next installment of the Voyager relaunch helmed by the indomitable Kirsten Beyer: A Pocket Full of Lies. Look below for the stunning cover art, as well as the back-cover blurb and links to pre-order the novel from Amazon! 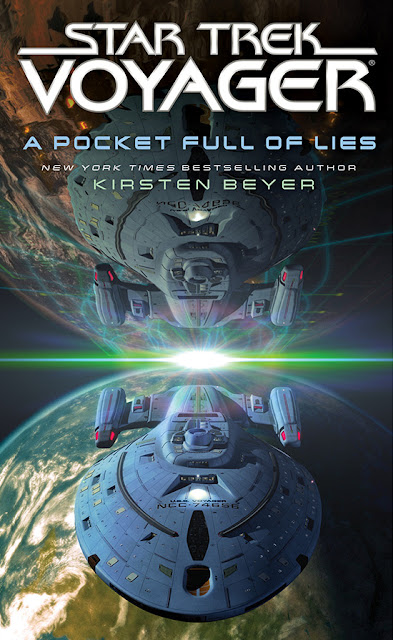 The Full Circle Fleet has resumed its unprecedented explorations of the Delta Quadrant and former Borg space. Commander Liam O'Donnell of the U.S.S. Demeter makes a promising first contact with the Nihydron—humanoid aliens that are collectors of history. They rarely interact with the species they study but have created a massive database of numerous races, inhabited planets, and the current geopolitical landscape of a large swath of the quadrant. When an exchange of data is proposed via a formal meeting, the Nihydron representatives are visibly shaken when Admiral Kathryn Janeway greets them. For almost a century, two local species—the Rilnar and the Zahl—have fought for control of the nearby planet Sormana, with both sides claiming it as their ancestral homeworld. The shocking part is that for the last several years, the Rilnar have been steadily gaining ground, thanks to the tactics of their current commanding officer: a human woman, who appears to be none other than Kathryn Janeway herself...


I'm definitely looking forward to this one! Kirsten Beyer's Voyager novels have yet to disappoint. Also, there are a few hints that point to what this novel might be about. The Rilnar, Zahl, and Nihydron are all species that appeared or were mentioned in the Voyager two-parter "Year of Hell." Also, take special note of the design that follows the "mirrored" Voyager in the above cover art. Does it look at all familiar? 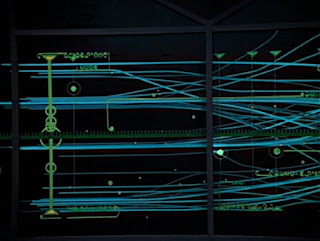 Correct me if I'm wrong, but those really look like the "timelines" display on Annorax's temporal weapon ship from "Year of Hell." We all know how much Beyer dislikes the "reset button"... could she be intending to undo one of Voyager's most egregious examples? Only time will tell...

Perhaps re-watching "Year of Hell" should be our assigned homework before January 26, the release date of A Pocket Full of Lies.

Pre-order A Pocket Full of Lies from: