The cover reveals for 2016 continue with the unveiling of the cover art for the April novel, The Original Series: The Latter Fire by New York Times bestselling author James Swallow, thanks to a "first look" exclusive on StarTrek.com. A slightly redesigned logo graces the cover of this novel, giving it a unique look. The gorgeous shot of the Enterprise makes this cover a winner!

Look below for the back-cover blurb and links to pre-order from Amazon. You'll be helping us out here at Trek Lit Reviews! 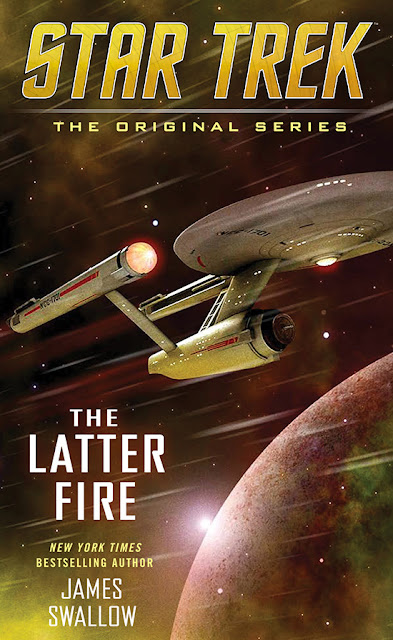 
The five-year mission of the Starship Enterprise has brought the vessel and her crew to the forefront of an important first contact operation. Under the command of Captain James T. Kirk, the ship is heading to the planet Syhaar Prime in the Beta Quadrant—the homeworld of an alien civilization preparing to take its first steps onto the galactic stage. One year earlier, the Enterprise came across a badly damaged Syhaari explorer vessel drifting in deep space. In collaboration with the explorer’s captain, Kirk and his crew were able to restore the ship to full function and send it on its way. And now, as the Syhaari display rapid technological progress in the past year, hard questions must be asked. Is it possible that the Enterprise crew leaked advanced technology or information to the Syhaari during their first encounter, in violation of the Prime Directive?


Pre-order The Latter Fire from: