Literary Treks 123: The Line is a Dot to You 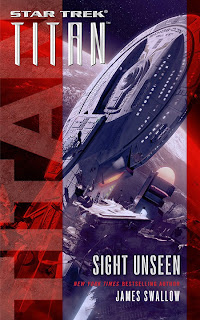 The Fall series brought about massive changes for the crew of the Titan as the ship was recalled from the Gum Nebula region, and Riker was promoted to Admiral. The changes continue as the ship receives a new mission and some new crew members.

In this episode of Literary Treks, hosts Matthew Rushing and Dan Gunther are joined by James Swallow to talk about his book, Sight Unseen. We discuss Titan’s new course, Riker and Vale, the new characters, juxtaposition, survival, horror Trek, bringing things back, personal moments, new elements, James’ other projects, and our final thoughts.

In the news segment, we judge the cover of Voyager: Pocket Full of Lies.