A new cover has been unveiled today: the new release for June, The Lost Era: One Constant Star by David R. George III. The design features a return to the past style of Lost Era novels. This one is pretty fascinating! I look forward to learning more about this novel as the release date nears.

Check out the cover and back-cover blurb below, and also find links to purchase One Constant Star from Amazon and thereby support Trek Lit Reviews! 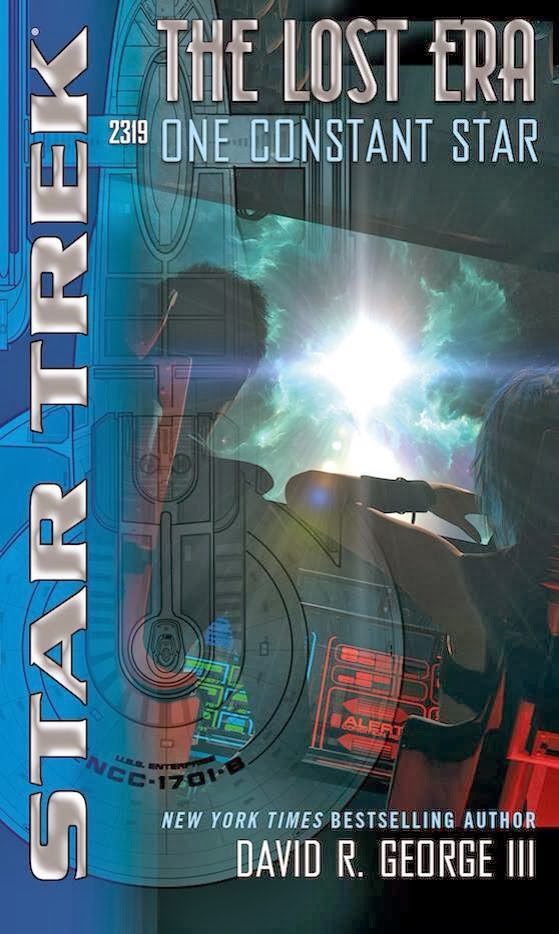 When Captain Demora Sulu leads the crew of U.S.S. Enterprise-B on a mission near Tzenkethi space, they explore Rejarris II, a planet they cannot explain. A strange structure on the surface could hold answers, but when a landing party transports down to study it, chaos erupts. After communication fails with one officer and another is horribly injured, Captain Sulu deems the planet too dangerous to continue exploring. She decides to leave Rejarris II, but not until she can retrieve her lost crew member. But when contact is ultimately severed with the captain, a Tzenkethi force subsequently appears. Could they be behind the mysteries on the planet, or the disappearances of the Enterprise officers?

Once, John Harriman commanded the Enterprise-B, with Demora Sulu by his side as his first officer. Eight years after stepping down as a starship captain—in the wake of the Tomed Incident—Harriman now serves as an admiral based out of Helaspont Station, on the edge of the Tzenkethi Coalition. When he receives a mysterious message from Rejarris II, Harriman realizes that he might hold the key to finding his former crewmate. In choosing to help recover Demora Sulu, though, he could risk losing everything he holds dear. What price is Harriman willing to pay to attempt to rescue his longtime friend?


One Constant Star continues the adventures of the Enterprise-B as chronicled in David R. George's previous novel, The Lost Era: Serpents Among the Ruins. Click the links below to purchase One Constant Star from Amazon!