Star Trek: The Next Generation #4
Survivors
By Jean Lorrah 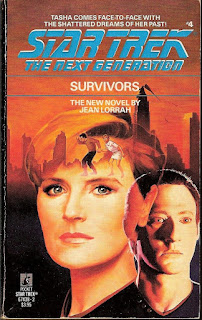 Purchase:
Mass-market paperback: Amazon.com | Amazon.ca | Amazon.co.uk
E-book (Kindle): Amazon.com | Amazon.ca
Lieutenant Tasha Yar was a character who didn’t get much of a chance to shine. Lasting not quite an entire season, Denise Crosby elected to leave the show before the end of season one. While the true potential of the character went unrealized on screen, one author took it upon herself to tell her story.
In this episode of the Positively Trek Book Club, hosts Dan and Bruce return to the early days of TNG to take a look at the “Tasha Yar” novel: Survivors by Jean Lorrah. We discuss Yar’s backstory, Dare, the planet Treva, Data’s life as a survivor, the conclusion, and Tasha Yar’s death at the hands of Armus. 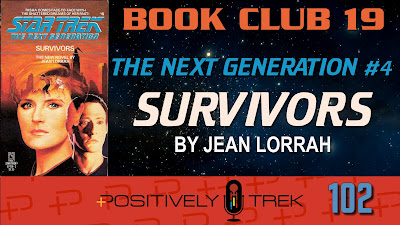