Hey everyone! I'm just back home from a week away in Las Vegas, attending the 2018 Las Vegas Star Trek convention! Of course, the biggest news from the convention was the announcement of the return of Jean-Luc Picard to the Star Trek television universe. However, before that, we learned of the much-anticipated and long-awaited end to the drought of Trek novels with the news of three new novels coming at the start of 2019 with more to follow!

First up is a new Star Trek: Discovery novel by Una McCormack, titiled The Way to the Stars. The novel will center around Sylvia Tilly and her back story, telling us how she came to be a cadet aboard the U.S.S. Discovery. Here's the cover art and back cover blurb, along with links to purchase from Amazon! 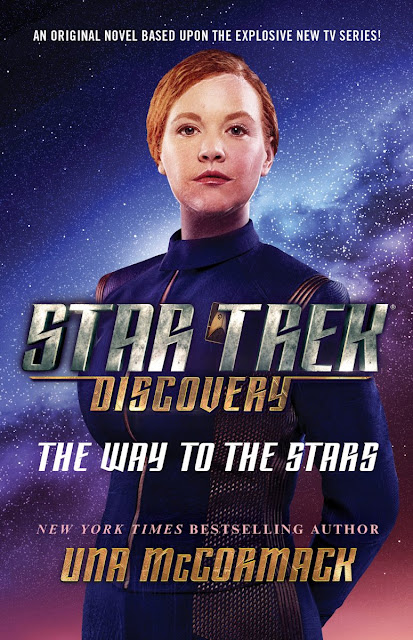 An original novel based on the explosive new TV series Star Trek: Discovery!

Despite being an inexperienced Starfleet cadet, Sylvia Tilly became essential to the U.S.S. Discovery finding its way back home from the Mirror Universe. But how did she find that courage? From where did she get that steel? Who nurtured that spark of brilliance? The Way to the Stars recounts for fans everywhere the untold story of Tilly’s past.

It’s not easy being sixteen, especially when everyone expects great things from Tilly. It’s even harder when her mother and father are Federation luminaries, not to mention pressing her to attend one of the best schools that the Federation has to offer. Tilly wants to achieve great things—even though she hasn’t quite worked out how to do that or what it is she wants to do. But this year, everything will change for Tilly, as she about to embark upon the adventure of a lifetime—an adventure that will take her ever closer to the stars….

The Way to the Stars will be released on January 8th, 2019 in paperback and e-book!

Next up is an Original Series novel by Greg Cox, The Antares Maelstrom, an area of space name-dropped by Khan in Star Trek II: The Wrath of Khan. No cover art yet, but here is the blurb and purchasing links:

And finally, in April we get a continuation of the post-Nemesis continuity with a new TNG novel: Available Light by Dayton Ward! The story follows up on Section 31: Control by David Mack as well as the A Time To series (which we are currently covering on the Literary Treks podcast). Here's the blurb and Amazon links:

The past comes back to haunt Captain Jean-Luc Picard in this brand new thriller set in the universe of Star Trek: The Next Generation.

Section 31, the covert organization which has operated without accountability in the shadows for more than two centuries, has been exposed. Throughout the Federation, the rogue group’s agents and leaders are being taken into custody as the sheer scope of its misdeeds comes to light. Now Starfleet Command must decide the consequences for numerous officers caught up in the scandal—including Admirals William Ross, Edward Jellico, Alynna Nechayev, and Captain Jean-Luc Picard who, along with many others, are implicated in the forced removal of a Federation president.

Check out the newly-created 2019 releases page frequently as we get more updates!