We have a new book released today! Unfortunately, it's one of only a few that will be coming this year, but some is better than none! Make sure to pick up your copy of Kirsten Beyer's Star Trek: Voyager: Architects of Infinity today! It's available as a mass-market paperback with copies showing up in bookstores over the past week or so, as well as an e-book version available today! 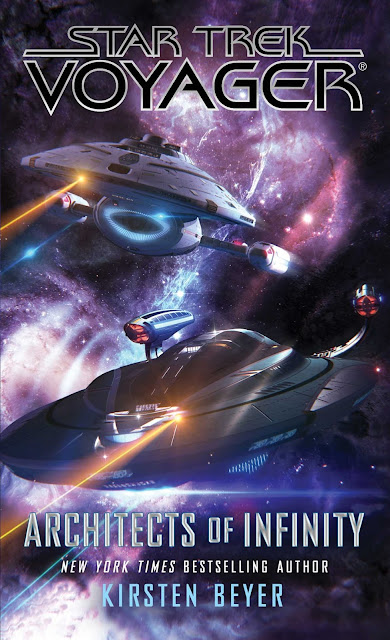 
An original novel set in the universe of Star Trek: Voyager, from the New York Times bestselling author!

As the Federation Starship Voyager continues to lead the Full Circle Fleet in its exploration of the Delta Quadrant, Admiral Kathryn Janeway remains concerned about the Krenim Imperium and its ability to rewrite time to suit its whims. At Captain Chakotay's suggestion, however, she orders the fleet to focus its attention on a unique planet in a binary system, where a new element has been discovered. Several biospheres exist on this otherwise uninhabitable world, each containing different atmospheres and features that argue other sentient beings once resided on the surface. Janeway hopes that digging into an old-fashioned scientific mystery will lift the crews' morale, but she soon realizes that the secrets buried on this world may be part of a much larger puzzle—one that points to the existence of a species whose power to reshape the galaxy might dwarf that of the Krenim.

Meanwhile, Lieutenants Nancy Conlon and Harry Kim continue to struggle with the choices related to Conlon’s degenerative condition. Full Circle’s medical staff discovers a potential solution, but complications will force a fellow officer to confront her people’s troubled past and her own future in ways she never imagined…

Previous Release: Discovery: Drastic Measures
Next Release: Prometheus: The Root of All Rage
Posted by Dan Gunther at 5:56 PM