Going by the currently-available release schedule from Simon and Schuster, we won't be getting many releases this year, so it's doubly embarrassing that I didn't post this on time! However, better late then never as the cliche goes. Yesterday was the official release day of the latest offering from the world of Trek fiction: Discovery: Drastic Measures by Dayton Ward! It has already been showing up on bookshelves around the world, so go pick up your copy today! And check out below for the cover art, back cover blurb, and links to purchase Drastic Measures from Amazon. 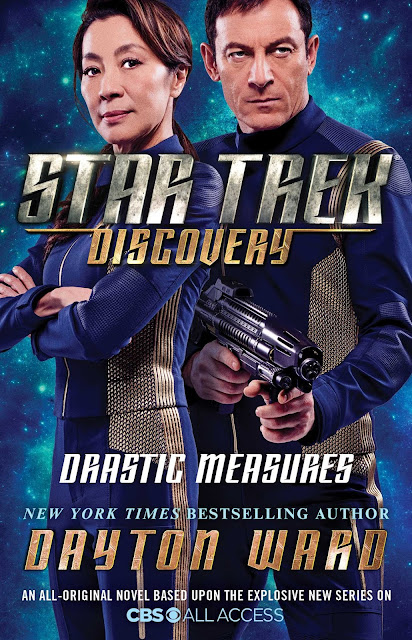 
An original novel based upon the explosive new Star Trek TV series on CBS All Access!

It is 2246, ten years prior to the Battle at the Binary Stars, and an aggressive contagion is ravaging the food supplies of the remote Federation colony Tarsus IV and the eight thousand people who call it home. Distress signals have been sent, but any meaningful assistance is weeks away. Lieutenant Commander Gabriel Lorca and a small team assigned to a Starfleet monitoring outpost are caught up in the escalating crisis, and bear witness as the colony’s governor, Adrian Kodos, employs an unimaginable solution in order to prevent mass starvation.

While awaiting transfer to her next assignment, Commander Philippa Georgiou is tasked with leading to Tarsus IV a small, hastily assembled group of first responders. It’s hoped this advance party can help stabilize the situation until more aid arrives, but Georgiou and her team discover that they‘re too late—Governor Kodos has already implemented his heinous strategy for extending the colony’s besieged food stores and safeguarding the community’s long-term survival.

In the midst of their rescue mission, Georgiou and Lorca must now hunt for the architect of this horrific tragedy and the man whom history will one day brand “Kodos the Executioner”….