Spoilers ahead for Spectre!


Retired and happily in love, Kirk believes his adventuring days are over. But as he returns to Earth for the first time since his apparent "death" upon the Enterprise-B, events elsewhere in the galaxy set in motion a mystery that may provide Kirk with his greatest challenge yet.

The Enterprise-E, under the command of Captain Jean-Luc Picard, is exploring an unstable region of space on a scientific mission of vital concern to Starfleet when they discover the last thing they ever expected to find: a lonely, battle-scarred vessel that is instantly recognizable to every member of Picard's crew. Five years after being lost with all hands in the Delta Quadrant, the Starship Voyager has come home!

The commander of Voyager, one Tom Paris, explains that Captain Kathryn Janeway and half of the original crew is dead, but if that is true, who is the mysterious woman who has kidnapped Kirk back on Earth, pleading with him to assist her against a threat to the entire Federation?

All is not as it seems, and soon Kirk is forced to confront the hideous consequences of actions taken more than a hundred years prior, as well as his own inner doubts. After years of quiet and isolation, does he still have what it takes to put things right-and join with Captain Picard to save the lives of everyone aboard a brand-new Enterprise?

An unforgettable saga peopled by old friends and ancient enemies, Star Trek: Spectre propels Kirk on a journey of self-discovery every bit as harrowing as the cataclysmic new adventure that awaits him.

Once again, the 24th century is in danger, and once again, only James T. Kirk can save it!

Spectre is the first book of William Shatner's Mirror Universe trilogy, and again this book series features the retired captain being brought back into service to counter a new threat to the safety of the Federation. It seems, of course, that he is uniquely suited to countering this enemy and winning the day, all while the "next generation" of starfleet sits in the wings, seemingly impotent against the threat of the mirror universe. Picard, for instance, loses the Enterprise to the enemy who has ventured into our universe from the mirror universe, and falls victim to them a number of times, having to be rescued by Kirk on a few occasions. He even finds himself irresistibly attracted to Kirk's wife, Teilani, because she's just that beautiful and alluring. Or her pheromones are in overdrive because she's pregnant. Could go either way, actually.

Of course, it's William Shatner's world, and you're all just playing in it! 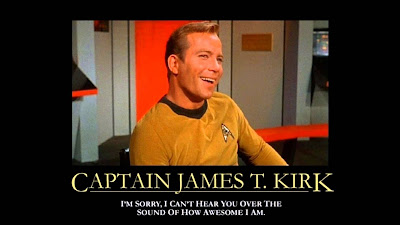 Still, it is quite frustrating when Kirk is the one to solve all of the problems with the TNG crew sitting on sidelines saying the equivalent of "I dunno." With that being said, there is a lot to enjoy in this "Shatnerverse" outing.

First, I love the "mirror" debate as it is presented in Spectre. Is someone who has our face and our DNA the same as us deep down, shaped solely by the different experiences they have had in their lives, or are they two fundamentally different people? Star Trek Nemesis attempted to tackle this question with Picard and his clone, Shinzon, to limited success in my opinion. I much prefer the juxtaposition in Spectre between "our" Jean-Luc Picard and his Mirror Universe counterpart. The idea that someone exactly like myself in every way except for our life experiences could turn out to be a cold-blooded killer is a chilling thought, and Spectre plays with that idea quite well.


Part of the reason that Kirk is so willing to become involved with the mirror universe again is his feeling of responsibility for what has happened there. In the century since his initial visit in the TOS episode "Mirror, Mirror," the Terran Empire has collapsed, defeated by "The Alliance," a pact that consists of the Klingons, the Cardassians, and later the Bajorans. Kirk feels that this was due to his attempt to convince Spock of the illogic of the empire, and the mirror Spock and Janeway believe this to be the case as well. Kirk's speech at the end of "Mirror, Mirror" convinced mirror Spock to dismantle the empire by becoming emperor and instituting a number of reforms. However, I disagree that Kirk is responsible. The denizens of the Mirror Universe had their own decisions to make, and pinning everything on Kirk is unfair. I mean, sure, Kirk's speeches are legendary, but I think that taking sole responsibility for the fate of an alternate universe is taking it a bit far. I instead agree with the Spock of "our" universe, who says to Kirk, "Jim, can you honestly believe that a handful of words you exchanged with my counterpart can have led to such far-reaching consequences in the mirror universe?"

Regardless, Kirk sees it as his responsibility to right the wrongs of the past and help steer the Mirror Universe onto a better path, and Spectre is the first chapter in a story that will force Kirk to come face to face with the greatest enemy he has ever faced: Tiberius, his mirror universe counterpart who is a powerful megalomaniacal tyrant, and will surely be an incredibly formidable opponent.

He is, after all, William Shatner deep down as well, isn't he?

Spectre, like most of the novels of the Shatnerverse, suffers a bit from the ego of William Shatner, in my opinion. It seems that Kirk has to be superhuman and can never have an equal among the people around him. And fair enough, it's written by William Shatner (along with Judith and Garfield Reeves-Stevens), and his face is on the cover, so it's understandable the story has to be centered on him. However, the TNG crew's "voices" never seem to ring true for me, and the idea of Kirk being this awesome this late in his life strains credibility as the books go on. However, there is enough to like in this novel that I can give it a safe three out of five stars, and the story itself was interesting enough to make me want to pick up the next book, Dark Victory.

Next up is another video review, this time for Dayton Ward's Hidden Universe Travel Guide to the Klingon Empire!