A Pocket Full of Lies

Spoilers ahead for A Pocket Full of Lies!


The Full Circle Fleet has resumed its explorations of the Delta Quadrant and former Borg space. Captain Regina Farkas of the USS Vesta makes a promising first contact with the Nihydron—humanoid aliens that are collectors of history. They rarely interact with the species they study but have amassed a large database of numerous races, inhabited planets, and the current geopolitical landscape of a large swath of the quadrant. When an exchange of data is proposed via a formal meeting, the Nihydron representatives are visibly shaken to be greeted by Admiral Kathryn Janeway. For almost a hundred years, two local species, the Rilnar and the Zahl, have fought for control of the nearby planet Sormana, with both sides claiming it as their ancestral homeworld. The shocking part is that for the last several years, the Rilnar have been steadily gaining ground, thanks to the tactics of their current commanding officer: a Human woman, who appears to be none other than Kathryn Janeway herself…

As I have said in probably every review of a new Voyager release since my review of Unworthy back in 2011, it amazes me how great Voyager has become under the skilled pen of Kirsten Beyer. Voyager was always my least favorite of the Trek television series, and yet the Voyager novels have, in recent years, become the ones that I anticipate reading the most. A Pocket Full of Lies is certainly no exception.

While I generally enjoy most of the new releases from month to month, no author is more consistently great than Kirsten Beyer. More than anything else, her name on the cover of a Trek novel is an indicator of high quality writing and an engaging story. In this particular novel, we get a terrific story that builds on a number of earlier Voyager adventures from the series while bringing its own sensibilities to the ongoing mission of Voyager and the Full Circle fleet.

One of my favorite stories from Voyager's seven year television run was the two-parter "Year of Hell." Featuring great drama and high stakes for the crew of Voyager, "Year of Hell" was a riveting couple of hours of television. Completely satisfying, that is, until the last ten minutes of the second part. Voyager is often known for using the "reset button," and "Year of Hell" features the most egregious example. In one fell swoop, the entirety of the two hours of television are wiped out, without even a vague memory remaining in existence for the characters. A Pocket Full of Lies, however, finds a way to make that story actually matter to the current timeline, and that alone is worth picking up this novel.


Based on the cover design, I was already expecting the tie-in to "Year of Hell." However, what I wasn't expecting was a surprise continuation of story elements from the seventh season episode "Shattered." A very middle-of-the-road-not-great episode of Voyager (in my opinion), "Shattered" apparently sparked the imagination of Kirsten Beyer in an interesting and unexpected way. She is very good at taking mediocre storytelling from the series and crafting compelling adventures from them. In previous novels, season two's "Twisted" was the basis of creatures encountered by Voyager, and the use of "Shattered" here makes me wonder if we should just comb Voyager's catalog of episodes for any past-tense verb titles to discover where Beyer might next take the story!


One of the issues that Beyer explores in this novel is the idea of depression, and the effect this has both on the person suffering from it and on their friends and the people who care about them. Through the character of Nancy Conlon as well as, surprisingly, Tuvok, Beyer explores this issue with a deftness and sensitivity that is amazing to read. Conlon's experiences especially resonated with me. Having known several people who have suffered from severe depression and battle with despair on a daily basis, I found the reactions of Beyer's characters to be grounded very much in reality. Harry Kim's relationship with Conlon in particular felt very real, and I found myself empathizing with everyone involved in the situation. (Harry Kim, a compelling character... I would never have thought this possible before reading a Kirsten Beyer novel!) 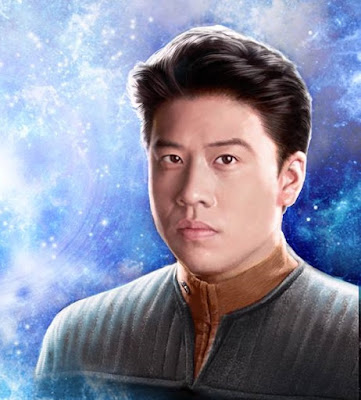 There are many more aspects of this novel that I haven't even touched on, such as how our life experiences change who we are, and a great many more character moments that make this novel very much worth a read. For one thing, A Pocket Full of Lies handles the question of differing experiences making a person who they are in a much better way than, say, Star Trek Nemesis does. And any novel that makes me really appreciate the character of Icheb is highly worthy of praise! And, as an added bonus, a hanging plot thread from all the way back in The Eternal Tide is tied up in a very unexpected and pleasant way.

With 2016 having just begun, A Pocket Full of Lies has already set the bar very high for Star Trek novels this year. A very fun and very compelling read, this novel not only tells its own story very well, but it also serves to expand on and enhance Voyager stories that have come before. Add to that the fact that Beyer manages to undo the biggest reset button push of all of Star Trek, and A Pocket Full of Lies becomes a must-read. There are many big Trek novels coming out throughout this year, which is Star Trek's 50th anniversary, and I have to say that they all have their work cut out for them if they hope to be the equal of this stellar novel.

More about A Pocket Full of Lies:

Look for my review of The Ashes of Eden, the first novel of the "Shatnarrative," coming soon!