Spoilers ahead for Full Circle!


When the U.S.S. Voyager is dispatched on an urgent mission to the planet Kerovi, Captain Chakotay and his first officer, Commander Thomas Paris, must choose between following their orders and saving the lives of two of those dearest to them. B'Elanna Torres and her daughter, Miral, are both missing in the wake of a brutal attack on the Klingon world of Boreth. With the aid of their former captain, Admiral Kathryn Janeway -- as well as many old friends and new allies -- Voyager's crew must unravel an ancient mystery, placing themselves between two warrior sects battling for the soul of the Klingon people...while the life of Miral hangs in the balance.

But these events and their repercussions are merely the prelude to even darker days to come. As Voyager is drawn into a desperate struggle to prevent the annihilation of the Federation, lives are shattered, and the bonds that were forged in the Delta Quadrant are challenged in ways that none could have imagined. For though destiny has dealt them crushing blows, Voyager's crew must rise to face their future...and begin a perilous journey in which the wheel of fate comes full circle.

Recently, the eighth episode of Star Trek: Discovery aired. Titled "Si Vis Pacem, Para Bellum" (If You Want Peace, Prepare for War), the episode was written by one of my favorite Trek novelists of all time: the supremely talented Kirsten Beyer. I'm on the record time and again for saying that Voyager is my least favorite Trek series, with shoddy character development and inconsistent plotting. All of that changed, however, when Kirsten Beyer took the reins of the "Voyager relaunch" and made the characters of this show into compelling people for whom I actually mustered some feelings for other than ambivalence! Who would have thought that I would actually end up caring about Harry Kim and Chakotay? For this review, I thought I would take a look at the novel that started the current state of affairs in the Voyager relaunch, Full Circle.

As I have talked about ad nauseam, the primary arena in which the television series Star Trek: Voyager disappointed me was in characterization. The series had so much potential with a cast of interesting characters, but rather than develop them over the course of seven years, it felt as though many of them were standing still. You could replace season six Chakotay with season one Chakotay, and I would wager that most viewers would never know the difference. All that changes in the literary universe, with Kirsten Beyer doing things with these characters I never thought possible.


Full Circle is split into two parts: in the first part, much of the story from the previous Spirit Walk duology is wrapped up, with B'Elanna and her daughter Miral on the run from a dangerous Klingon sect, along with the fallout from the Next Generation novel Before Dishonor by Peter David, in which Admiral Janeway lost her life while investigating a Borg cube. Various crewmembers from Voyager deal with her death, with Chakotay taking it the hardest. The second part of the novel takes place after David Mack's Star Trek: Destiny trilogy, in which the Federation faces a massive Borg invasion in which billions are killed. 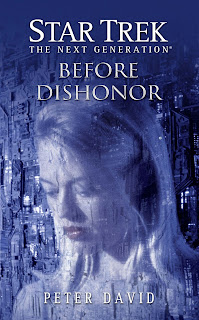 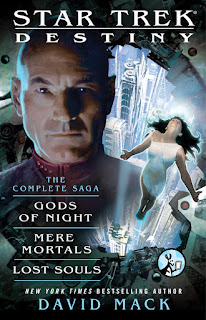 The novel Before Dishonor and the Destiny series both play a big role in setting up the story in Full Circle.

This novel exemplifies all of the reasons I was so thrilled when Kirsten Beyer was announced as a staff writer on Star Trek: Discovery. Her ability to handle complex plots while at the same time masterfully writing compelling characters and real emotion is unparalleled. Not only are the old school Voyager characters served very well, but the new characters introduced into this universe are wonderful as well. I really enjoy the character of Afsarah Eden, the head of project Full Circle, and later the new captain of Voyager. Her story is set up in an interesting way, leaving lots of room for exploration of her background and destiny in the book series.

Another character that impressed me greatly is counsellor Hugh Cambridge. His acerbic attitude is a lot of fun, but he also has a very interesting arc with Chakotay. The journey these two take together is truly interesting, and I like how their relationship evolves.

Full Circle is one of those novels that you can return to again and again and still enjoy. Wonderful character work, some truly intriguing plot developments, and the setup for a great series of novels to come make this one a long time favorite of mine. Kirsten Beyer is at her best in the pages of Full Circle, and you owe it to yourself to check it out!

The entire Voyager series under Kirsten Beyer has been impressive, but this novel sets the stage for the greatness that follows. Full Circle was, at the time I first read it, one of the best Trek novels I had ever read, and now, years later, it retains much of that status. While it isn't my absolute favorite of the relaunch series (that honor is reserved for the truly singular Children of the Storm), it is still at the top of a very select list of truly great Trek novels. A huge hearty recommend from me: if you haven't read the Voyager relaunch novels by Kirsten Beyer, pick up Full Circle today and give it a go. Even if you're not the biggest Voyager fan, you will be impressed. This is some great stuff.

Next up for written reviews is a classic: Best Destiny by Diane Carey. Meanwhile, on the video review front, I am still working on TNG: Hearts and Minds by Dayton Ward from this past year. Coming soon!