The Insolence of Office

Spoilers ahead for The Insolence of Office and the rest of the Slings and Arrows series!


A major turning point in the lives of two of the Enterprise crew! Newly promoted Admiral Hayes gives La Forge an ultimatum: his VISOR is a security risk, and he must either have it replaced with ocular implants or be transferred to a less sensitive post.

Meanwhile, Troi has some issues of her own. Though she knows that her mother Lwaxana recently remarried to the Tavnian Jeyal, she was unaware of the subsequent pregnancy -- and now Lwaxana is about to give birth. To make matters worse, the Tavnian government has decided that, even though Lwaxana and Jeyal are now divorced, the child still belongs to them.

The 2007 e-book series chronicling the first year of service of the Enterprise-E continues in book three: The Insolence of Office. In this installment, we learn about a couple of developments during that period: Geordi transitioning from his VISOR to ocular implants and the birth of Deanna Troi's new sibling.

In the Deep Space Nine episode "The Muse," a pregnant Lwaxana Troi turns up at the station seeking Odo's protection. She is fleeing her Tavnian husband, Jeyal, who wishes to take the male child from Lwaxana once he is born. In the end, Odo ends up marrying Lwaxana, even going so far as convincing Jeyal that their love is genuine. As we find out in this novella, however, the Tavnian government is not entirely convinced. A representative arrives on Betazed to take the child into custody just as Lwaxana goes into labor. Deanna Troi, who is visiting, must keep him at bay while her little brother is delivered.


Meanwhile, on the Enterprise, Geordi LaForge receives a disturbing ultimatum: he must either replace his VISOR unit with ocular implants, or be reassigned from the Enterprise to a "less sensitive" posting. Trek fans will recall that Geordi's VISOR has presented a security risk on a number of occasions, the most recent of which contributed to the loss of the Enterprise-D in Star Trek: Generations. Faced with the decision to either acquiesce to Admiral Hayes' order or resign from Starfleet, LaForge isn't sure what course to take.


I like that both of these stories get some attention in this miniseries, especially with regards to Lwaxana's pregnancy. I always found it bothersome that Deanna played no part in the story when it happened on Deep Space Nine, and it was nice to find out why that was. I also enjoyed the examination of Lwaxana's character and her choices of potential mates over the years. The story came to some interesting conclusions regarding her outlook on life.

With regards to Geordi's story, I never really found it necessary to explain why he changed from the VISOR to the implants, but William Leisner was able to craft a fascinating story out of the change. I was worried that this story would forever color LaForge's change to the implants negatively, not allowing me to see them without thinking about the terrible choice that he had to face. However, the end of the story makes it clear that it is actually his decision and that he makes it freely, which was a really good way to resolve the situation. Regardless, the story asks some difficult questions about security versus freedom. These are questions that have a great deal of relevance in today's world, and any time fiction can examine these issues in a mature manner, I'm on board.

I found The Insolence of Office to be a very worthwhile read, but I do have to say, the cover art is somewhat... questionable. First of all, Lwaxana's bedroom (where she gives birth to her son) looks an awful lot like Voyager's sickbay for some reason. And second, the stylistic choices are a little troublesome. I often set my cell phone background picture as the cover art of the next review I have to work on, so for a week I was subjected to this whenever I picked up my phone: 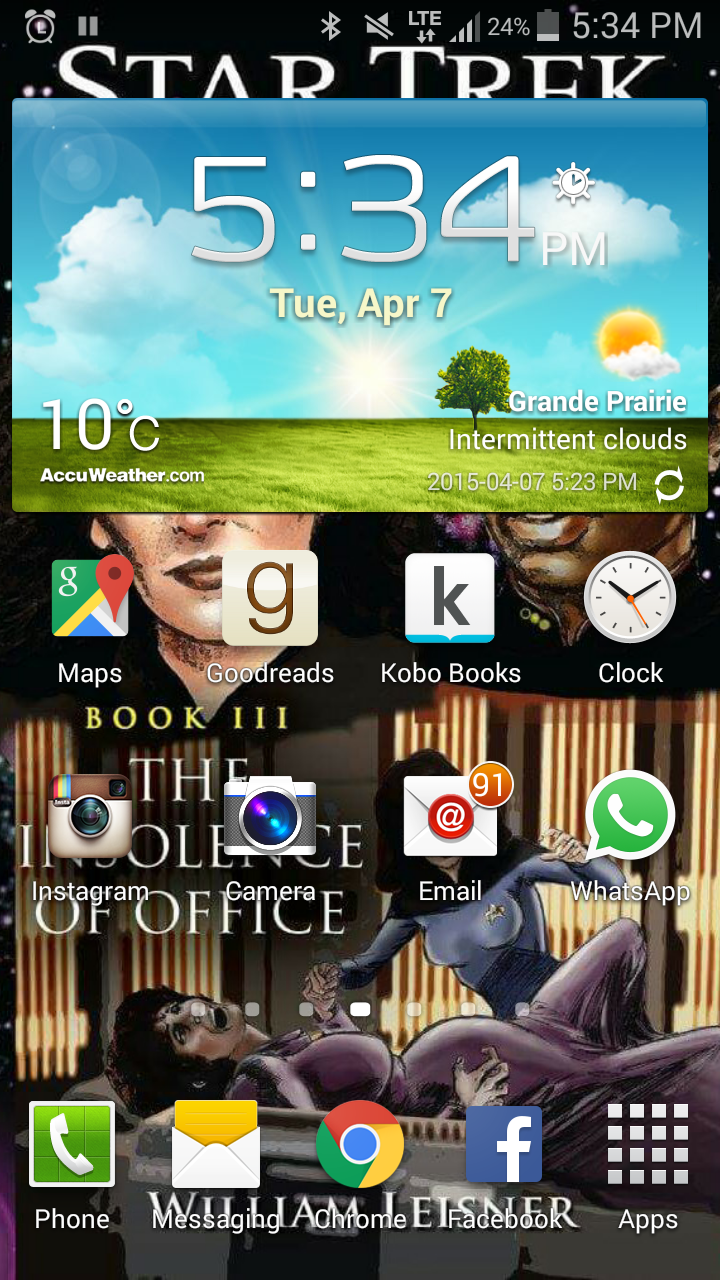 Needless to say, the picture of Lwaxana in the midst of her labor was somewhat... disturbing!

This coming week, I am hoping to do a marathon of reviews for four stories in the Starfleet Corps of Engineers e-book series: the four novellas that comprise the omnibus Some Assembly Required. Check back here on Monday when the first of these reviews should be published: Aaron Rosenberg's The Riddled Post!