We have another new cover to unveil today! This time, we take a look at this summer's new TNG book, The Light Fantastic by Jeffrey Lang. Check out the cover below! Then, read the "back-cover blurb" and click the links to pre-order the novel from Amazon. If you do, you'll be helping out Trek Lit Reviews, and we really appreciate it! 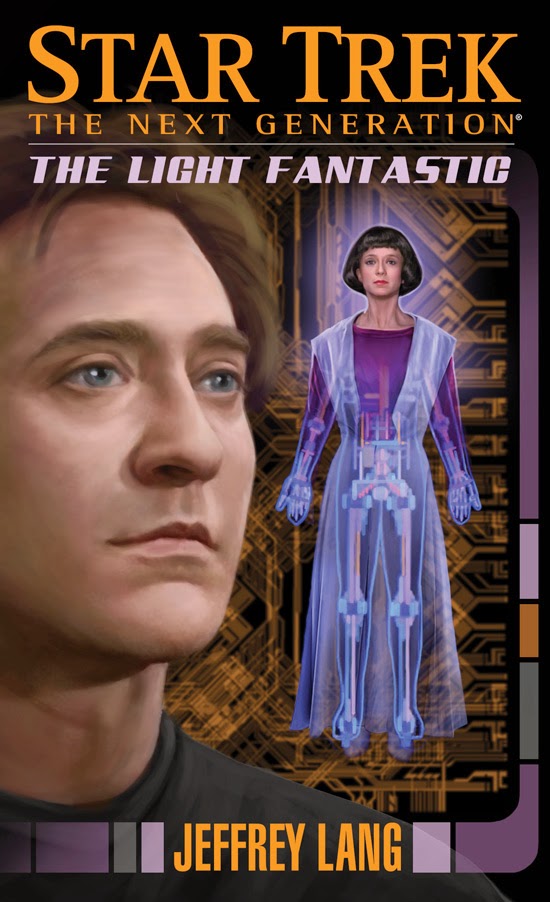 He was perhaps the ultimate human achievement: a sentient artificial life-form—self-aware, self-determining, possessing a mind and a body far surpassing that of his makers, and imbued with the potential to evolve beyond the scope of his programming.

And then Data was destroyed.

Four years later, Data’s creator, Noonien Soong, sacrificed his life and resurrected his android son, who in turn revived the positronic brain of his own artificial daughter, Lal. Having resigned his commission, the former Starfleet officer now works to make his way on an alien world, while also coming to grips with the very human notion of wanting versus having a child.

But complicating Data’s new life is an unexpected nemesis from years ago on the U.S.S. Enterprise—the holographic master criminal Professor James Moriarty. Long believed to be imprisoned in a memory solid, Moriarty has created a siphon into the "real" world as a being of light and thought. Moriarty wants the solid form that he was once told he could never have, and seeks to manipulate Data into finding another android body for him to permanently inhabit . . . even if it means that is Data himself.

Returning to the story begun in the novel Immortal Coil and continuing in the bestselling Cold Equations trilogy, this is the next fascinating chapter in the artificial life of one of Star Trek’s most enduring characters.


Pre-order The Light Fantastic from Amazon using the links below!