NEWS: Soliciation covers for Raise the Dawn and Fallen Gods

The Simon and Schuster Online Catalogue has been updated with new (and definitely not final) covers for next year's Typhon Pact: Raise the Dawn by David R. George III and Titan: Fallen Gods by Michael A. Martin.  They are due to be released in July and August of 2012, respectively.

Solicitation cover for Raise the Dawn: 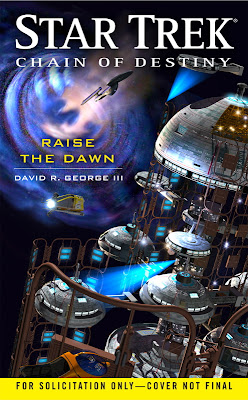 Clearly not the final cover for Raise the Dawn, as it features the original title for the series, Chain of Destiny, rather than the now-confirmed series title Typhon Pact. 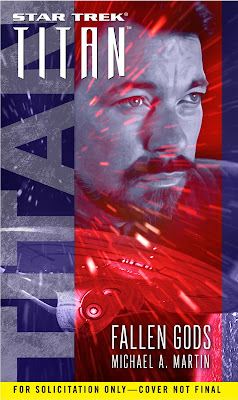 Odd that the cover features the Enterprise-E rather than the Titan.  For all we know, the story does feature the Enterprise in some fashion.  However, since this is just a solicitation cover and not the final product, it is likely the Enterprise is just a place-holder.
Posted by Dan Gunther at 11:09 PM