The Children of Kings


Spoilers ahead for The Children of Kings!

A distress call goes out from a Federation outpost near the Klingon border.  The U.S.S. Enterprise, under the command of Captain Christopher Pike, responds.  Starbase 18 lies in ruin.  There are no survivors.  And there is no clue as to who is responsible for the attack, until Captain Pike's brilliant science officer discovers a means of retrieving parts of the station's log.  Lieutenant Spock has detected signs of a unique energy signature, one that he believes is Klingon.  There are unsubstantiated reports that the Klingon Empire has made a technological leap forward and created a cloaking device--code-named Black Snow Seven--that can shield their ships from even the most advanced sensors.  The destruction of the base and the unique energy signature that remains prove that the Empire has succeeded.

For generations the Orions have been known as pirates, operating at the margins, outside of legal conventions.  A proud and powerful race, the Orions were once a major force in the sector, and they have been using the tension between the Klingon Empire and the Federation to rebuild their power.  Captain Pike is charged with trying foster cooperation between the Orions and the Federation.  A distress call from an Orion vessel offers him the perfect opportunity.  But the Orion ship lies is disputed space long claimed by the Klingon Empire, and crossing it could be the spark that sets off an interstellar war.

The Children of Kings is set during the Captain Pike-era of Star Trek lore.  The Enterprise is responding to a distress call from Starbase 18, seemingly under attack by Klingons.  The starbase is destroyed, but not all is as it seems.

Dr. Boyce, the Enterprise's chief medical officer, is captured by Orions during a supposed rescue mission, which was merely a ruse.  Boyce is forced by the Orion leader (called the "tallith") to work on a serum designed to prolong life.  Meanwhile, the Enterprise crew is led to believe that Captain Pike has been killed.  With the arrival of a number of starships to augment the Enterprise in the area, command of Enterprise is given to Captain Dmitri Vlasidovich.

During the course of The Children of Kings, we learn more about the Orions, work with a renegade Klingon captain to rescue his father, and learn about the machinations of a pair of Starfleet Intelligence operatives determined to pin the attack on Starbase 18 on the Klingons and steal a prototype Klingon cloaking device.

Where do I begin?  The Children of Kings left me confused and befuddled for much of the time I was reading.  I was expecting a straight-forward Star Trek adventure taking place in the period of time before Kirk took command of the ship.  Indeed, several times we are told that the novel takes place three months into Captain Pike's five-year mission.  However, a number of things didn't add up that made this detail-oriented Trekkie bristle.  For example, the book makes mention of "red-shirts" a number of times.  However, during Pike's time, the uniform colour scheme didn't include red.  Number One, Pike's first officer, accesses a database belonging to the Ferengi Commerce Authority.  While the Ferengi had been encountered before this point in the television series Enterprise (see: "Acquisition"), formal first contact would not be made until Star Trek: The Next Generation, over one hundred years after this book supposedly takes place.  Certainly, enough would not have been known to be able to access one of their government databases.  Finally, the Klingons' development of a cloaking device at this time in Trek history does not track with what we know about when the cloaking device was created and by whom.

After many pages of head-scratching, I finally reached the end, where the author's notes informed me that the book did not conform to the "prime" Star Trek timeline, and instead should be read as a prequel to the "new timeline" movie, Star Trek, that came out in 2009. NOW everything makes sense!  If only this information had been included in an "historical note" or the like at the beginning of the novel, I would have been saved much confusion.  The unfortunate thing is that The Children of Kings doesn't even precisely follow the new Star Trek continuity either, as the adventure in the movie is mentioned as being the "maiden voyage" of the Enterprise. 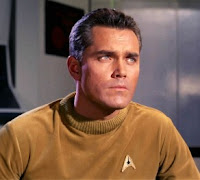 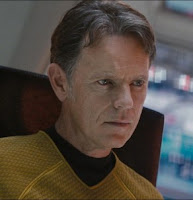 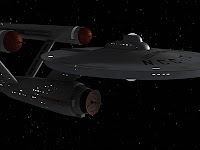 Some of the writer's choices of language and style didn't sit very well with me, either.  For example, at two points in the book, Stern writes characters as thinking "not."  As in, the way we would make a lame joke in the 90s: "Are you coming to my party?"  "Yes... NOT!"  This really took me out of the story, and had me wondering why a book written in 2010 featuring characters in the 23rd century would make them sound like school kids from the mid-90s.

The positives:  It was nice to learn more about the Orions and their culture, and the opportunity to follow the lives of characters we don't know much about is always welcome.

The negatives:  I think that Trek literature affords the opportunity for writers to "fill in the gaps" in Star Trek history.  It would have been nice to see more of what happened to Spock and Pike's crew in the early days of their careers.  Because The Children of Kings doesn't seem to conform to any particular Trek continuity, it's frustrating that this is not accomplished.

Confusing plot and setting elements, as well as a plot that leaves a number of threads dangling (What will become of the Orion government?  What will the fall-out with the Klingons and Starfleet Intelligence be?) made this a less-than-enjoyable reading experience.  This book had a lot of potential, and I feel it would have been much better had Mr. Stern stuck with one particular continuity rather than muddying the issue.


More about The Children of Kings: