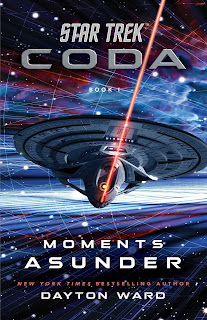 Purchase:
Hardcover: Amazon.com | Amazon.ca | Amazon.co.uk
E-book (Kindle): Amazon.com | Amazon.ca | Amazon.co.uk
Audiobook: Amazon.com | Amazon.ca | Amazon.co.uk
The Temporal Apocalypse begins! For 20 years, the “novelverse” has presented us with a unique opportunity to grow the Star Trek universe outside the films and television that make up “canon,” with authors given unprecedented freedom to take the stories of the TNG era in new and exciting directions. After all, there was no way that televised Trek would ever return to the 24th century… right? Well, all of that changed with Star Trek: Picard, which meant that in order to line up with canon, the novelverse would have to be fixed. That fix comes in three parts, with the Star Trek: Coda trilogy by authors Dayton Ward, James Swallow, and David Mack.
In this episode of the Positively Trek Book Club, hosts Dan and Bruce sit down with Dayton Ward to discuss Moments Asunder, the first book of the Coda trilogy. We talk about a story 20 years in the making, Dayton’s collaborators, Wesley Crusher, the big baddies of the novel, shocking story moments, swinging for the fences, and wrap up with our final thoughts and where Dayton can be found online and what he’s working on next. 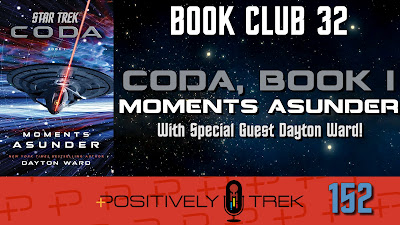