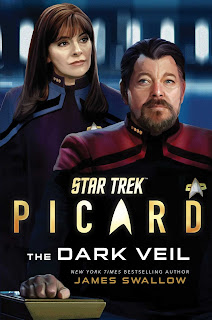 Purchase:
Hardcover: Amazon.com | Amazon.ca | Amazon.co.uk
E-book (Kindle): Amazon.com | Amazon.ca | Amazon.co.uk
Audible: Amazon.com | Amazon.ca | Amazon.co.uk
The year is 2386, and the United Federation of Planets has been dealt a serious blow: synthetic lifeforms have attacked the Utopia Plantia Shipyards at Mars, derailing a massive relief effort to save the Romulan people from an impending supernova. The Federation, reacting to this tragedy, has turned inward, halting relief efforts in the Romulan Empire and instituting a ban on research and development of synthetic lifeforms. All of this serves as the backdrop to the situation facing Captain Riker and the crew of the U.S.S. Titan as they respond to an urgent distress call from the Jazari, a species situated very near the Romulan Neutral Zone…
In this episode of the Positively Trek Book Club, hosts Dan and Bruce welcome renowned author James Swallow to the show to discuss his latest novel, Star Trek: Picard: The Dark Veil. We talk about the genesis of the novel, the links to the Star Trek: Titan book series, Thaddeus Worf Troi-Riker, the situation in the Federation, the Romulans, the Jazari, easter eggs and continuity connections, and wrap up with where James can be found online and what he has coming next! 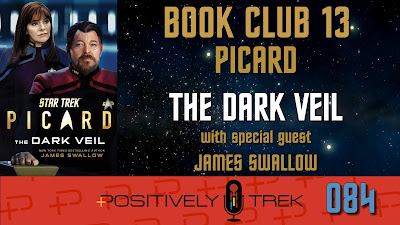 
Previous episode: Federation
Next episode: The Lost Era: The Sundered