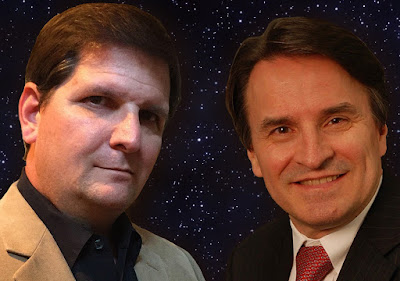 For almost the entire history of Star Trek, novels have played a part in many people's experience of the fandom. They are a way to go beyond what we see on the screen, and Star Trek fiction novels now account for scores more adventures than the television shows and films. But how does a Star Trek novel come to be, and what goes into the writing of a Star Trek adventure in book form?

In this episode of Literary Treks, hosts Dan Gunther and Bruce Gibson are joined by veteran Star Trek authors Dayton Ward and David R. George III to discuss how to write Star Trek novels. We talk about how they got their start in writing, the process of how a Trek novel is published, how writing tie-in fiction differs from writing original fiction, how they approach writing the established characters, working with CBS licencing, and what is required for someone to become a Star Trek author. We wrap up by talking about what projects they currently have on the go, and where they can be found online.

In the news segment, we report on a new Discovery novel coming in December, a schedule change for The Autobiography of Mr. Spock, and a new Voyager Mirror Universe comic coming from IDW. We also review the sixth and final issue of The Q Conflict, as well as respond to listener feedback from The Babel Conference for Literary Treks 274: An Old Man in the Park Feeding Pigeons.