Literary Treks 260: Sorry to All the Sela Fans

The Next Generation:
Death in Winter
by Michael Jan Friedman 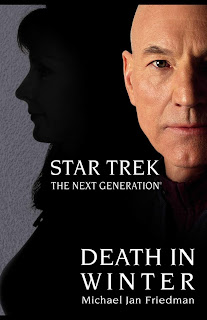 Following the film Star Trek Nemesis, novels in the Star Trek literary universe were given more of a free reign to play with the familiar characters and situations, creating what has been termed the "novelverse." Without any more televised or filmed adventures for the crew of the Enterprise-E on the horizon, authors could take the story in new and exciting directions. One of these directions involved the culmination of the "will they/won't they" romance of Jean-Luc Picard and Beverly Crusher, as well as a new source of turmoil for the Romulan Empire.

In this episode of Literary Treks, hosts Dan Gunther and Bruce Gibson discuss the TNG "relaunch" novel Death in Winter. We talk about Beverly's transfer off the Enterprise, the state of the Romulan Star Empire, an undercover mission into Romulan space, Worf and Geordi's role in the story, the love between Picard and Crusher, and wrap up with our final thoughts and ratings.

At the top of the show, we discuss your feedback from the Babel Conference on Literary Treks 258: Inaccurate Operas Will Be Performed of This Day!