A couple of new novel covers have been released in the past few days, along with the back-cover summaries. Some interesting books on the horizon!

First up is the much-anticipated Star Trek: Enterprise: Rise of the Federation: A Choice of Futures. (That's a mouthful!) The cover for this one looks to be a little uninspired, but after all, the true worth is in the words. And if the back-cover blurb is any indication, this is going to be a good one! 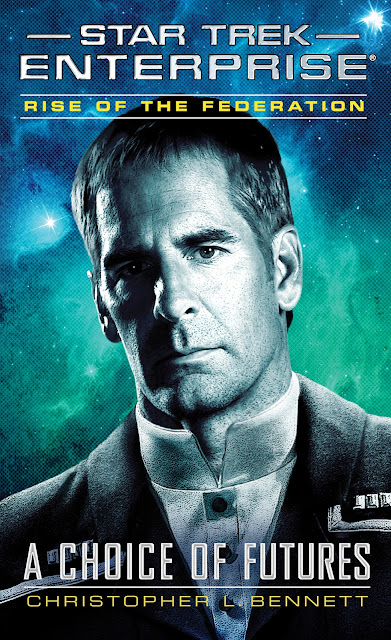 A new nation has arisen from the ashes of the Romulan War: the United Federation of Planets, an unprecedented union of diverse species cooperating for the good of all. Admiral Jonathan Archer—the former captain of the Earth starship Enterprise, whose efforts made this union possible—envisions a vibrant Federation promoting galactic peace and a multispecies Starfleet dedicated to exploring strange new worlds. Archer’s former crewmates, including Captain T’Pol of the U.S.S. Endeavour and Captain Malcolm Reed of the U.S.S. Pioneer, work with him to secure that bright future. Yet others within the Federation see its purpose as chiefly military, a united defense against a dangerous galaxy, while some of its neighbors view that military might with suspicion and fear. And getting the member nations, their space fleets, and even their technologies to work together as a unified whole is an ongoing challenge.

When a new threat emerges from a force so alien and hostile that negotiation seems impossible, a group of unaligned worlds asks Starfleet to come to its defense, and the Federation’s leaders seize the opportunity to build their reputation as an interstellar power. But Archer fears the conflict is building toward an unnecessary war, potentially taking the young nation down a path it was never meant to follow. Archer and his allies strive to find a better solution...but old foes are working secretly to sabotage their efforts and ensure that the great experiment called the Federation comes to a quick and bloody end.


Sounds pretty exciting to me! Next up on the Original Series front is From History's Shadow by Dayton Ward. This cover is really fascinating. Check it out below, with the back-cover blurb following: 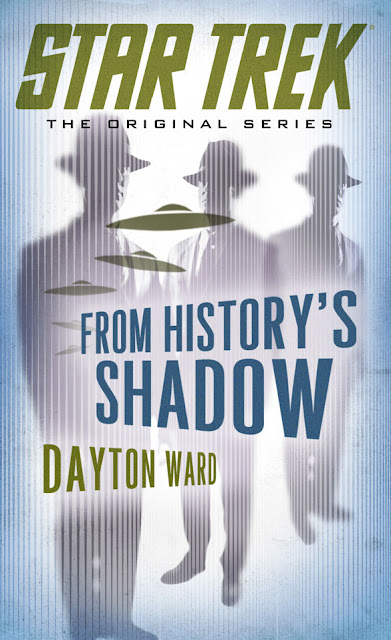 2268: Following their encounter with the mysterious Gary Seven in the twentieth century, the crew of the U.S.S. Enterprise is startled by two intruders who have transported through space and time from Earth circa 1968. Incredibly, one of the infiltrators is a Vulcan, who asserts that he’s lived among Earth's population for over a decade. The other represents a little-known race, and reveals to Captain James T. Kirk that she has spent that last twenty years working to bring about humanity’s destruction. It is then that Gary Seven’s young protégé, Roberta Lincoln, arrives seeking Kirk’s help....

1947: In the wake of the infamous “Roswell Incident” involving a crashed alien craft and beings from another world, Captain James Wainwright finds himself recruited as one of the first members of Majestic 12, a secret organization with two goals: Collect evidence of extraterrestrial activity on Earth, and develop strategies to combat alien invaders. And it is this very mission that will consume Wainwright’s life for the next two decades, driven by the knowledge that the danger is as real as the aliens living among us...

It looks as though this one might be a continuity-lovers dream, with appearances from all manner of characters from Star Trek's history. Methinks the Vulcan referenced in the first part is Mestral, from Enterprise's "Carbon Creek."

Rise of the Federation: A Choice of Futures is due to be released on June 25th. You can preorder it from Amazon.com now!

From History's Shadow is also available for preorder from Amazon. It will be released on July 30th.