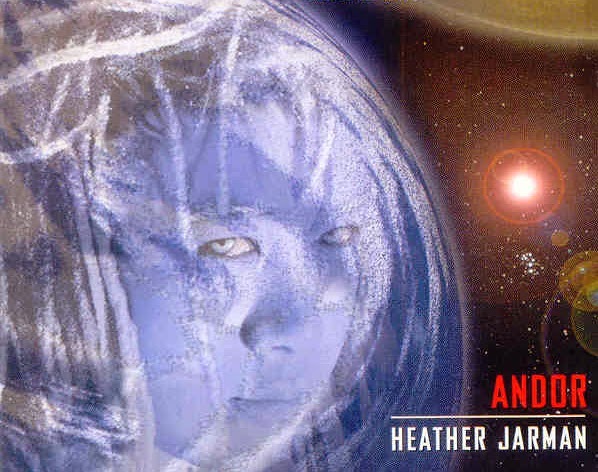 Spoilers ahead for Paradigm and the rest of the Deep Space Nine relaunch!


On the eve of a great celebration of their ancient past, the unusual and mysterious Andorians, a species with four sexes, must decide how much they are willing to sacrifice in order to ensure their survival. Biological necessity clashes with personal ethics; cultural obligation vies with love -- and Ensign Thirishar ch'Thane returns home to the planet he forswore, to face not only the consequences of his choices, but a clandestine plan to alter the very nature of his kind.

The Deep Space Nine relaunch introduced readers to a slate of new characters to go along with the familiar DS9 characters who remained on the station following the series finale, "What You Leave Behind." Among my favorites of these newcomers was a young Andorian ensign named Thirishar Ch'Thane.

Until Star Trek: Enterprise, none of the Star Trek television series really explored this fascinating species in detail. Thankfully, the novels existed to pick up the slack. In the pages of the post-finale DS9 novels, we learned more about the Andorians than ever before. Their unique four-sex biology was explored (extrapolated from a throwaway line by Data in the TNG episode "Data's Day"), and much was revealed about their culture and societal obligations through the character of "Shar" and that of his "Zhavey," Charivretha zh'Thane.

In Paradigm, Shar returns home to Andor at the request of his zhavey, who is a prominent politician in the Federation. While there, he encounters Dizhei and Anichent, the surviving members of his "bondgroup," following the suicide of Thriss in the novel Cathedral.

The characters are by far where Paradigm shines. There is a lot going on at this point in Shar's life: he has recently dissolved his relationship with his remaining bondmates, possibly ending the chance to conceive a child; he is estranged from his own family, which has made life difficult not only for himself but for his mother's career; Shar's life is truly at a crossroads, and it isn't clear the direction he should take next.

Paradigm also serves as an interesting exploration of Andor and its culture. Some of the things it establishes are later contradicted by Star Trek: Enterprise, most notably in the episode "The Aenar," but with minimal squinting the differences are minor and go unnoticed. Jarman does an excellent job of making Andor (or Andoria) feel very real, and depicting a multi-faceted culture with deep traditions and values that often divide its people.

I really enjoyed Paradigm, and I felt that Heather Jarman delved deeply into the characters in this story. The emotions experienced by Shar and the other Andorian characters felt very real, while at the same time seeming genuinely "alien," different from the human norm we are used to. Shar deals with a lover's recent death, has to face her family (along with dealing with his own estranged mother), and is beginning to grow closer to Prynn Tenmei, an outsider that Andorian society would never approve of; it's some pretty heady stuff, and Jarman does a good job navigating the complex issues at play.