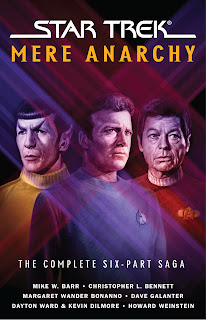 Because the Enterprise hops from planet to planet with no real connection to what came before, The Original Series is often seen as an anthology show. The literary universe gives the authors the opportunity to show that, just because a specific mission is over, it does not mean that the crew never returns to further the relationship that began in that episode.

In this episode of Literary Treks, hosts Matthew Rushing and Dan Gunther discuss The Centre Cannot Hold, the second book of the Mere Anarchy series. We talk about being back on Mestiko, the cold war era, spanning TOS, the Federation versus the Klingons, the long game, the dangerous game, and give our ratings.

In the news segment, we wrap up The Tholian Webs comic arc with Ongoing number 47.

Next episode: Literary Treks 114: An Overabundance of Colons