Literary Treks 111: A Pocket Universe of the 24th Century 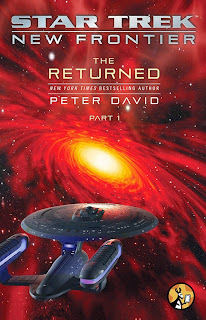 When the New Frontier series began in 1997, it was a bold experiment for Pocket Books: a series without lead characters from one of the canon Star Trek series. Over the years it's popularity has grown and it has gained a loyal following which has in turn lead to a new three-part e-book series.

In this episode of Literary Treks, hosts Matthew Rushing and Dan Gunther discuss The Returned, Part 1. We talk about New Frontier's return, working for a resolution, jumping in late, popcorn Trek, the legacy of New Frontier, a certain helmsman-turned-demigod, if this is the end, and why people should read the series.

For the news segment, we look at New Visions issue 7 as well as the beginning of The Spectrum War, Star Trek's crossover with Green Lantern.

Previous episode: Literary Treks 110: It's All About Soul