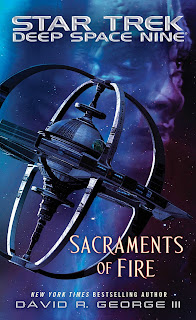 When The Soul Key ended in 2009, Star Trek fans were left with a massive cliffhanger as Illiana Ghemor stood in front of the Ascendants and proclaimed "I am the Fire." Unfortunately, the story of the Ascendants arc was lost as the DS9 books caught up with the rest of the 24th century in the Typhon Pact series. Lost, that is, until now.

In this episode of Literary Treks, hosts Matthew Rushing and Dan Gunther welcome author David R. George III back to discuss is latest DS9 novel, Sacraments of Fire, which begins the final arc of the Ascendants story. We talk about stitching together the DS9 quilt, the different faces of faith, Ro's growth, a place for Sisko, the many plot threads, the new DS9, tidbits about Ascendance, and where to find David online.