2017: another year gone! The time is flying by faster and faster each year, it seems. Let's take a quick look at the year that was.

The biggest news in the Trek universe this past year was, of course, the arrival of the newest Star Trek television series: Star Trek: Discovery, and with a new series comes new books! The end of September saw the release of the first book in the Discovery series, Desperate Hours by David Mack.

There were many other novels to choose from this past year besides Discovery, however, and the year started off in a typical manner: with an Original Series novel, The Face of the Unknown by Christopher L. Bennett. Interestingly, this was the only TOS novel this year, a marked changed from previous TOS-heavy release schedules.

Headlong Flight was next, a multiverse-spanning TNG adventure by Dayton Ward. Following that was a continuation of the Deep Space Nine story with The Long Mirage by David R. George III. Then, in March, came a very interesting story: Section 31: Control by David Mack. This story served to change the Trek universe forever, and fan reaction to this story was certainly mixed.

Because of changes to the release schedule thanks to both the shifting premiere date of Star Trek: Discovery and the delays surrounding Kirsten Beyer's Voyager novel, Architects of Infinity, there was an unprecedented gap in the Pocket Books' release schedule at the end of April. Unfortunately, it would not be the last.

Releases resumed at the end of May with another TNG story by Dayton Ward, Hearts and Minds. Enigma Tales was next, another in a series of truly excellent Deep Space Nine stories by Una McCormack. July was yet another gap in the release schedule, followed by Patterns of Interference by Christopher L. Bennett, the latest in his Enterprise: Rise of the Federation series.

September featured what appeared to be the start of a new miniseries: Deep Space Nine: Gamma: Original Sin by David R. George III, showcasing the voyages of the U.S.S. Robinson in the Gamma Quadrant under the command of Ben Sisko. Released on the same day was the aforementioned Discovery: Desperate Hours by David Mack.

October was yet another gap in the release schedule, with Titan: Fortune of War by David Mack rounding out the Pocket Books' schedule at the end of November.

Also released at the end of November, from Titan Books, was the English translation of the first ever original Trek novel to be published in German: Star Trek: Prometheus: Fire with Fire.

A pair of e-book exclusive novellas were also released in 2017, down from three from the previous year. Department of Temporal Investigations: Shield of the Gods by Christopher L. Bennett came out in June, while another DS9 Ferengi adventure by Paula M. Block & Terry J. Erdmann featured in November: I, The Constable, which has possibly the best Trek book cover art ever.


Last year, I lamented the fact that other projects had disrupted my productivity with regards to this site. This year, I'll put it in more succinct terms: it kicked my ass! I am quite a bit behind on getting reviews done, but my goal is to get caught up in the next couple of months. For the first time, I have also decided to do video reviews of the new releases, which has put me a bit behind. However, as I get better at the whole video thing, I hope to get them out a lot faster! The new releases promise to be a lot fewer this year, which is unfortunate, but it will allow me to catch up. More on that later.

2017 was a year of big gains for my YouTube channel, Kertrats Productions! While I didn't accomplish all of my goals, I'm quite pleased with the growth I've experienced, and I'm looking forward to more success in 2018. 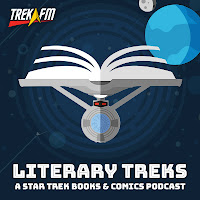 My involvement with the Literary Treks Podcast on Trek.fm was also a huge part of my year, and along with co-host Bruce Gibson, we have interviewed many Trek authors and covered many different areas in the Star Trek books and comics universe. Click here to take a look at Literary Treks and see what we got up to in the world of podcasts!

Check out below for the list of reviews I did this past year. Again, I am quite a bit behind, but I am working to catch up. The reviews of new releases are marked with an asterisk and link to my video reviews on YouTube. I will be filling out the new release links as I complete them over the next month or two.

*The Face of the Unknown by Christopher L. Bennett (Star Trek: The Original Series)

The Buried Age: A Tale of the Lost Era by Christopher L. Bennett (Star Trek: The Next Generation)

*Headlong Flight by Dayton Ward (Star Trek: The Next Generation)

The Romulan War: Beneath the Raptor's Wing by Michael A. Martin (Star Trek: Enterprise)

*Hearts and Minds by Dayton Ward (Star Trek: The Next Generation)

While I didn't get every new release reviewed in time for the end of the year, I did read them all. There are some wonderful stories in the selection of Trek novels in 2017, and as always, picking a clear winner is very difficult. Two in particular that rose to the top were Section 31: Control by David Mack and Deep Space Nine: Enigma Tales by Una McCormack. However, in the end, Control edged out the victory due to the sheer audacity of the story it told and the amazing drama that unfolded in its pages. So here it is, officially, the best Star Trek novel of 2017:

The story of the fall of Section 31 is an incredible one, and the effect that the artificial intelligence named Urei has on Star Trek history as a whole has to be read to be believed. This was a page-turner from start to finish, and the story will have reverberating effects throughout the Trek lit-verse for many more books to come! 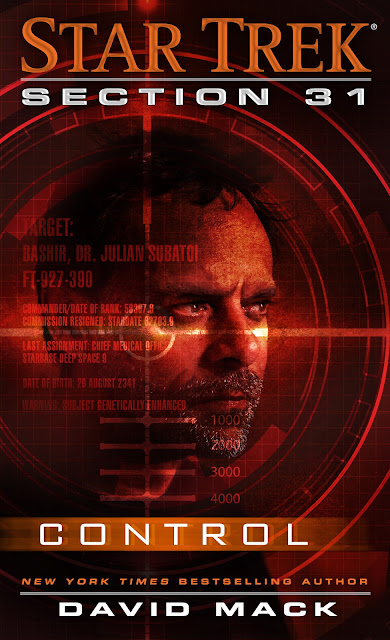 As always, let's finish up by taking a look at next year in Trek Lit.

Sadly, things are in a bit of a rough state at the moment. At last word, Pocket Books and CBS were still negotiating their new contract, which has left everything in a sort of limbo. The only novels this gives us on the schedule for next year from Pocket Books are two Star Trek: Discovery novels, Drastic Measures by Dayton Ward and Fear Itself by James Swallow, and the Kirsten Beyer Voyager novel Architects of Infinity, which has been delayed a couple of times thanks to Beyer's much busier schedule working in the writers' room on Star Trek: Discovery.

Drastic Measures features the Discovery characters Georgiou and Lorca dealing with the events on Tarsus IV perpetrated by "Kodos the Executioner," first referenced in the TOS episode "The Conscience of the King." It is set to be released on February 6th.

Fear Itself will be released later in the year with a street date of June 5th. The story centers around the Kelpien character Saru and his experiences before joining the crew of Discovery.

Architects of Infinity is set to be released on March 27th. No word yet on whether or not the promised follow-up novel, To Lose the Earth, is still scheduled for release.

In addition to the Pocket Books novels, we will also be getting two other Star Trek novels this year, completing the trilogy of Star Trek: Prometheus novels from Titan Books. Book two, The Root of All Rage, is due for release on May 29th, while book three, In the Heart of Chaos, is slated for November release.


For the most part, 2017 has been a pretty good year for Trek Lit, and an amazing year for Star Trek in general with the release of the newest Trek television show. At last, Star Trek is back on TV where it belongs! I have a plan to get things back on track for Trek Lit Reviews, and I have many plans for the Kertrats Productions YouTube channel. Stay tuned, and as always, live long and prosper!

Email ThisBlogThis!Share to TwitterShare to FacebookShare to Pinterest
Labels: 2017, year in review