Literary Treks 186: Tragedy in Every Sense of the Word 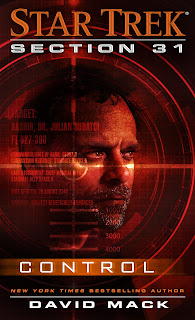 Section 31: The Federation's dirty little secret. Amoral, operating in the shadows, and accountable to no one, the secretive group has become a cancer in the body of the Federation. But what are Section 31's true origins? And can Julian Bashir finally succeed in bringing them down once and for all?

In this episode of Literary Treks, hosts Dan Gunther and Bruce Gibson are joined by author David Mack to talk about his latest novel, Section 31: Control. We discuss the origins of the story, the surveillance state, a chapter written in computer code, the nature of the intelligence behind Section 31, the roles of Data and his daughter Lal, Sarina's part in the story, what's next for the Federation, and wrap up with some hints for future Trek novels as well as some upcoming convention appearances for David Mack.

In the news segment, we preview an upcoming George Takei project with IDW comics and review issue number six of Boldly Go.