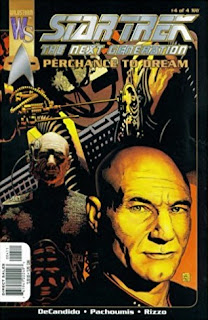 Captain Picard and the intrepid crew of the Starship Enterprise must stop a political assassination by extremists on a newly-admitted Federation world, all while battling their own inner demons thanks to a terrifying telepathic weapon. And the key to defeating that weapon can be found in the most unlikely place: the mind of Jean-Luc Picard!

In this week's episode of Literary Treks, hosts Dan Gunther and Bruce Gibson discuss "Perchance to Dream" by Keith R.A. Decandido, the first part in IDW's comic collection Enemy Unseen. We talk about Data's dreams, how the Damiano scandal mirrors our own society, Worf's security shortcomings, the crew's inner fears, Picard's multiple personalities, and finish with our ratings.

In the news segment, we preview new comics coming in June from IDW and review issue #4 of the Star Trek/Green Lantern crossover series, Stranger Worlds.